Inter Faith Week 2022 - Some highlights of an inspiring Week

Inter Faith Week 2022 drew to a close on Sunday. Thousands of people took part in the Week and its positive messages have also reached millions through social media.

Over 600 activities are already known to have taken place, and details of further events continue to come in. Canon Hilary Barber and Narendra Waghela, Co-Chairs of the Inter Faith Network for the UK, which supports the Week in England, Northern Ireland and Wales, hailed the Week an “inspiring success” and said "The Week’s growth reflects increasing awareness of the vital importance of people of different faiths and beliefs living together well, finding ways to engage on issues where there may be divergence of views and building on shared values to work for the common good."

The Week ran from 13 to 20 November. It started as usual on Remembrance Sunday to encourage the remembering together of the service of men and women of different faiths from the UK and the Commonwealth.

Central to Inter Faith Week is raising awareness about the faith communities in the UK, increasing ‘religious literacy’ and strengthening inter faith bonds. Inter Faith Week messages from religious and community leaders at the start of the Week highlighted that. For example, the Chief Rabbi spoke of ‘the potency of people of faith joining together in a spirit of friendship’, saying “This Inter Faith Week let us ensure that we continue to harness the power of interfaith engagement whenever the opportunity arises”; the Archbishop of Canterbury spoke of the “vital importance of religious literacy”; and Lord Singh of Wimbledon spoke of the “urgent need to highlight core ethical teachings”. These themes were  also taken up in messages from leaders of other faiths and denominations, which can be seen here.

The World Cup tournament opened as Inter Faith Week closed. The power of sport to foster inter faith understanding was a theme much in evidence in this year’s Week. For example, Building Bridges in Burnley held a youth football tournament with Burnley FC. The England and Wales Cricket Board did a special Inter Faith Week blog talking with people across the cricketing community about what their faith means to them and an inter faith cricket tournament took place in Batley with the support of the Yorkshire County Cricket Club and Kirklees Cohesion.

Environment and climate-focused activities were popular, from tree plantings – such as those in Brent, Devon, Hertfordshire, and Fermanagh and Omagh - to an Eco Show and Tell Sustainability Fair at the University of Middlesex. At Wolverhampton University, a small garden at the chaplaincy was dedicated, followed by reflections from Christian, Muslim, Pagan and Sikh traditions and discussion of practicalities of ‘rewilding’. There were also a number of events focussing on faith response to climate change held by local councils such as the London Boroughs of  Richmond and Wandsworth; universities such as Chester; faith communities and faith and inter faith initiatives, such as Bolton Council of Mosques, Leeds Church Institute (with Sanctuary Leeds), Faiths4Change, and Warrington Council of Faiths; and schools, such as those participating in the ‘Trees, Faith and Life’ exhibition at Birkenhead Central Library, in partnership with the Wirral Deen Centre.

Many schools took part in the Week, with activities ranging from themed lessons to quizzes, photography competitions and visits to local places of worship. A number, such as Pennard Primary, Langley Park Primary Academy and Dauntsey's School in Devizes, used the Week to invite speakers from local faith organisations and institutions to give presentations and talk with students. Cornwall Faith Forum worked with a number of Church primary schools in Cornwall to provide online engagement with young people from the Hindu, Jewish and Muslim faith communities. A virtual learning scheme also took place in Cumbria.

Many councils and local authorities celebrated the Week. For example, Coventry City Council explored a ‘faith compact’ for the City; Dudley Metropolitan Borough Council with Top Church Dudley and the Diocese of Worcester brought local faith leaders together; London’s Deputy Mayor for Communities hosted a gathering of faith leaders; Southwark Council explored the cost of living crisis; and Suffolk County Council worked with the East of England Faiths Agency to create an exhibition display and, like a number of other local authorities and also Government departments, arranged talks for staff to hear from people of different faiths and beliefs about their religion/belief.

The Week also saw significant engagement from Universities, with week-long programmes at a number such as the Universities of Cambridge, Durham and Southampton. Academic institutions such as the Woolf Institute and Parkes Institute held special focus conferences and programmes.

Visits to explore places of worship were very popular. Faith trails, inter faith walks and pilgrimages wound their way round places of worship in Cardiff (Inter Faith Council for Wales); the London Boroughs of Brent, Croydon and Newham; Bristol; Maidenhead; Derby; Milton Keynes; Lozells in Birmingham; Watford; Sunderland; and a number of other towns and cities. In Birmingham they toured on bicycles; in Newcastle on a ‘Friendship in Faith’ coach.

In Cheltenham, the London Borough of Hillingdon and some other areas, there were programmes with opening of many different places of worship: churches, gurdwaras, mandirs, mosques, synagogues, temples, viharas and others. Many places of worship invited in guests for special visits, for example the Swaminarayan Hindu Mandir in Chigwell, which hosted Essex Police; and Scunthorpe Gurdwara, which invited guests to a celebration of the birthday of Guru Nanak. In Belfast, the Church of Jesus Christ of Latter-day Saints followed a Remembrance Service with a tour for Northern Ireland Inter Faith Forum members of its church building.

Museums added to the learning experience with a number, such as Harrow Headstone Museum and Kirkstall Abbey (Leeds Museums), featuring specially curated exhibitions. There was also an inter faith themed exhibition held at Yeovil Art Space on ‘Natural Reflections’ created with local faith groups and a ‘Belief in Art’ exhibition in Canterbury, featuring original artwork from a range of religion and belief backgrounds. Crafts also featured strongly, for example a special quilt created in Kirklees with the help of different faith groups.  Music also featured in inter faith services and observances such as those held at the Shree Ghanapathy temple in London and by the Cardiff Baha’i community.

Discussions, talks and debates were also part of the Week: some, for example a London Buddhist Vihara event, exploring religious topics such as scriptures, others hearing faith and belief perspectives on issues such as responding to the cost of living crisis, restorative justice, and tackling domestic abuse.

The Week was widely used by hospitals and hospices such as Stockport NHS Trust, Barts NHS Trust and St Catherine’s Hospice in Crawley to raise awareness of, and strengthen, their provision for patients and staff of different faiths and beliefs. Workplaces also saw many activities, highlighting the importance for staff of faith and belief being seen positively at work. Network Rail’s Multi Faith Network held an exhibition at London King’s Cross.

One of the Week’s aims is encouraging dialogue between those of religious and those of non-religious beliefs. The Inter Faith Network for the UK and Humanists UK helped connect a number of people to take part in IFN’s Inter Faith Buddies scheme for a series of conversations about chosen topics of interest.

Many of the Week’s events were organised in partnership. For example, a Somerset Inter Faith Week Roadshow was a creative collaboration between Somerset Interfaith and Belief Network, Somerset Diverse Communities, St Margaret’s Hospice and Somerset NHS Foundation Trust. Faiths Forum for London, the National Multifaith Youth Network and the Museum of London came together to explore plans for a forthcoming joint project. A number of the activities of the Faith & Belief Forum were held in partnership, such as a panel held with the Union of Jewish Students hearing from four student leaders of different faith and belief backgrounds about the role of faith at universities and their vision for promoting stronger inter faith ties on campus.  The Near Neighbours programme of the Church Urban Fund supported and engaged with a wide programme of events. FaithAction supported and partnered in number of activities, including Faith Covenant signing or renewal in a number of areas such as Barnet, Brighton, and Birmingham.

The significantly lessened impact of COVID led to less virtual events. However, wide use was made of social media campaigns and videos. Some ran daily posts for the Week, others such as the UK Youth Interfaith featured videos. Redbridge Faith Forum put up daily video clips from its Trustees of different faiths on how faith communities can support people during the cost of living crisis. There was also continued use of webinars. For example the West Midlands Violence Reduction Partnership hosted a national webinar to demonstrate how faith-based approaches to violence reduction intersect with and compliment the widely adopted public health approach.

Mitzvah Day, a Jewish-led day of social action with a strong inter faith dimension, takes place at the same time as the last day of the Week. A number of volunteering activities were held for both the Week and Mitzvah Day, for example a day of conservation volunteering at Walthamstow Wetlands.

MPs, mayors and other councillors, Lord Lieutenants and High Sheriffs were  involved in many of the Weeks’s activities, helping plant trees and holding civic ceremonies. For example, the Lord Lieutenant of Devon joined the 20th anniversary Celebrations for the Plymouth Centre for Faiths & Cultural Diversity and the Major of Reading hosted Reading Interfaith Group in the Reading Civic Offices.

The Inter Faith Network for the UK held an Inter Faith Week information drop in at the Houses of Parliament for MPs, sponsored by Holly Lynch, MP for Halifax, with opening words from the Chair of the All Party Parliamentary Group for Faith and Society, Sir Stephen Timms.

Scottish Interfaith Week, running since 2004, also took place from 13-20 November. More information about this can be found at www.scottishinterfaithweek.org. It is led by Interfaith Scotland and was the inspiration for Inter Faith Week. 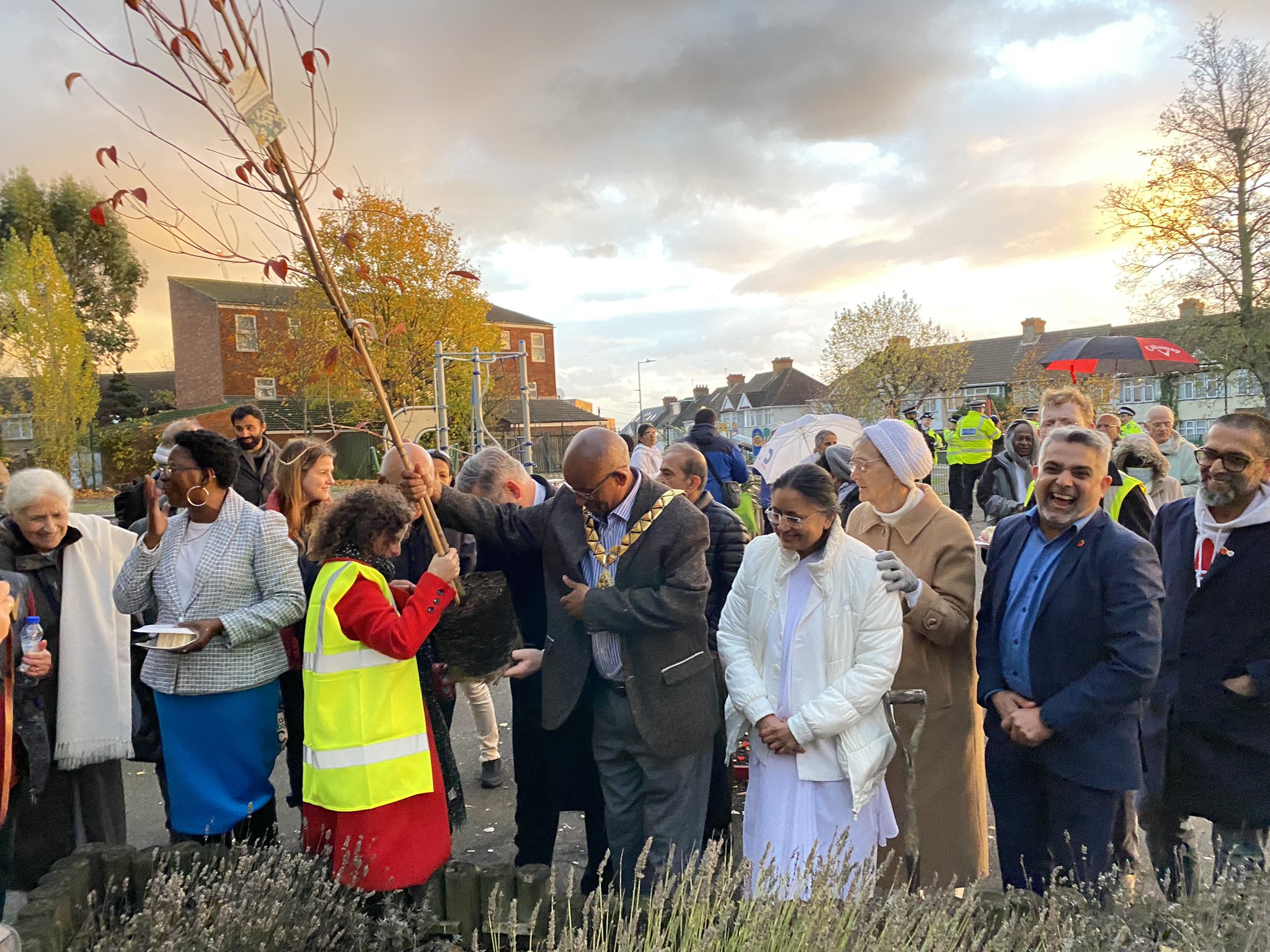 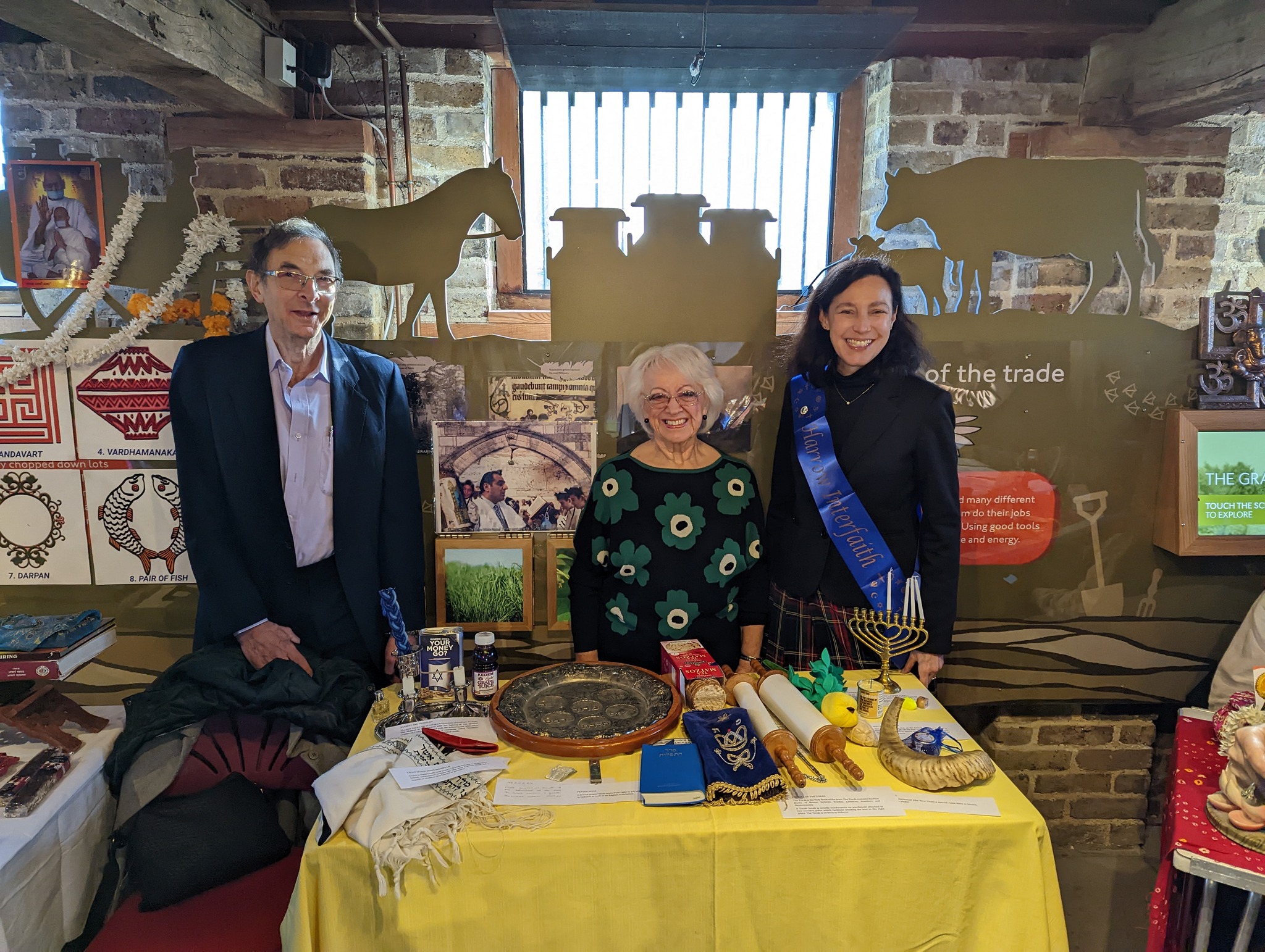 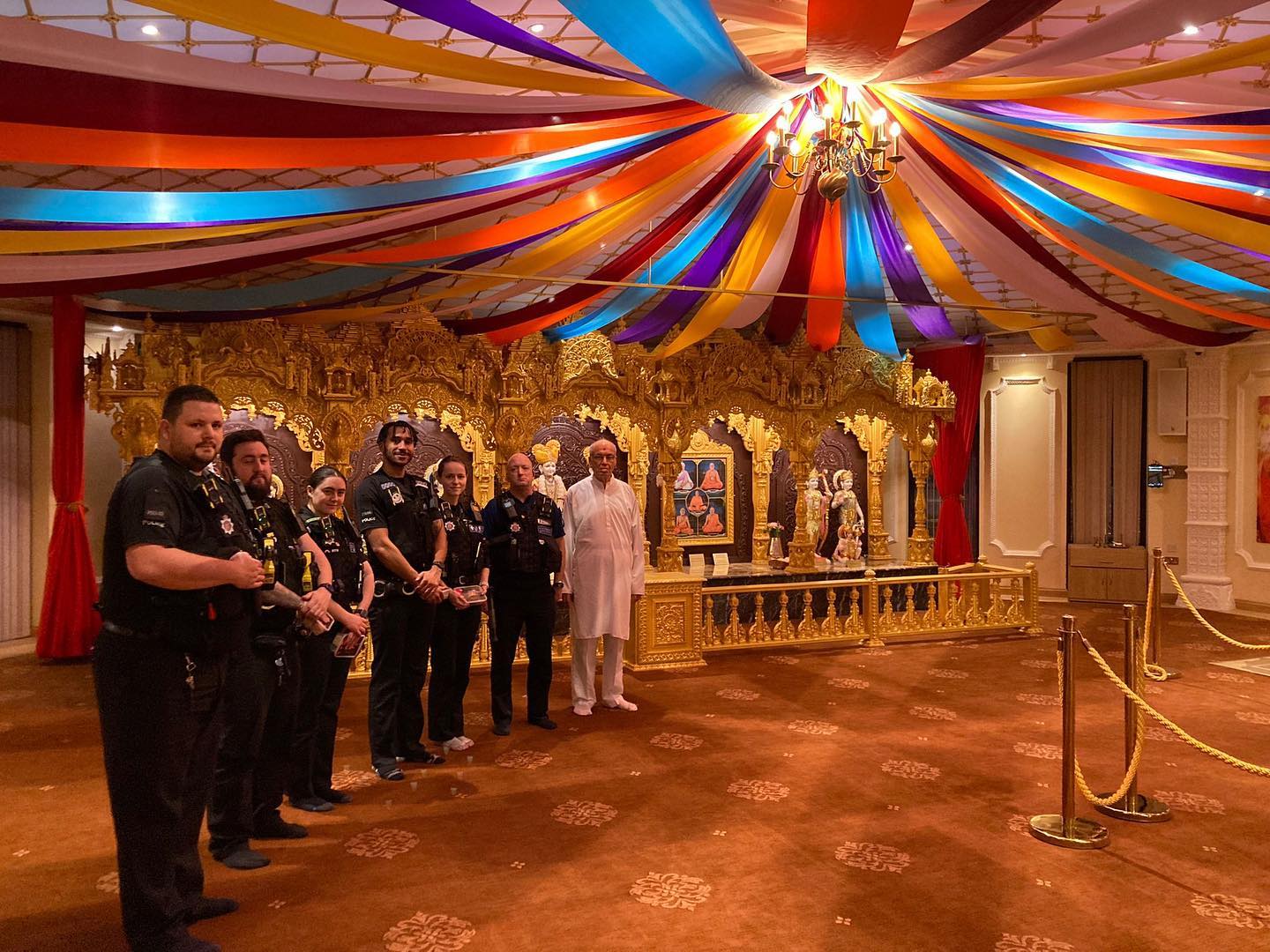 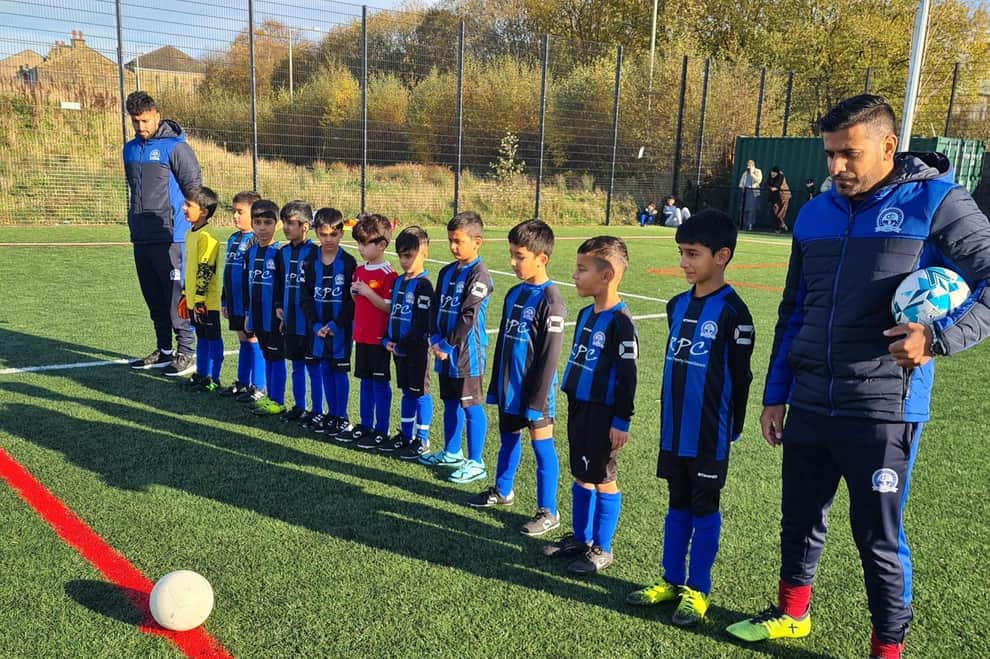 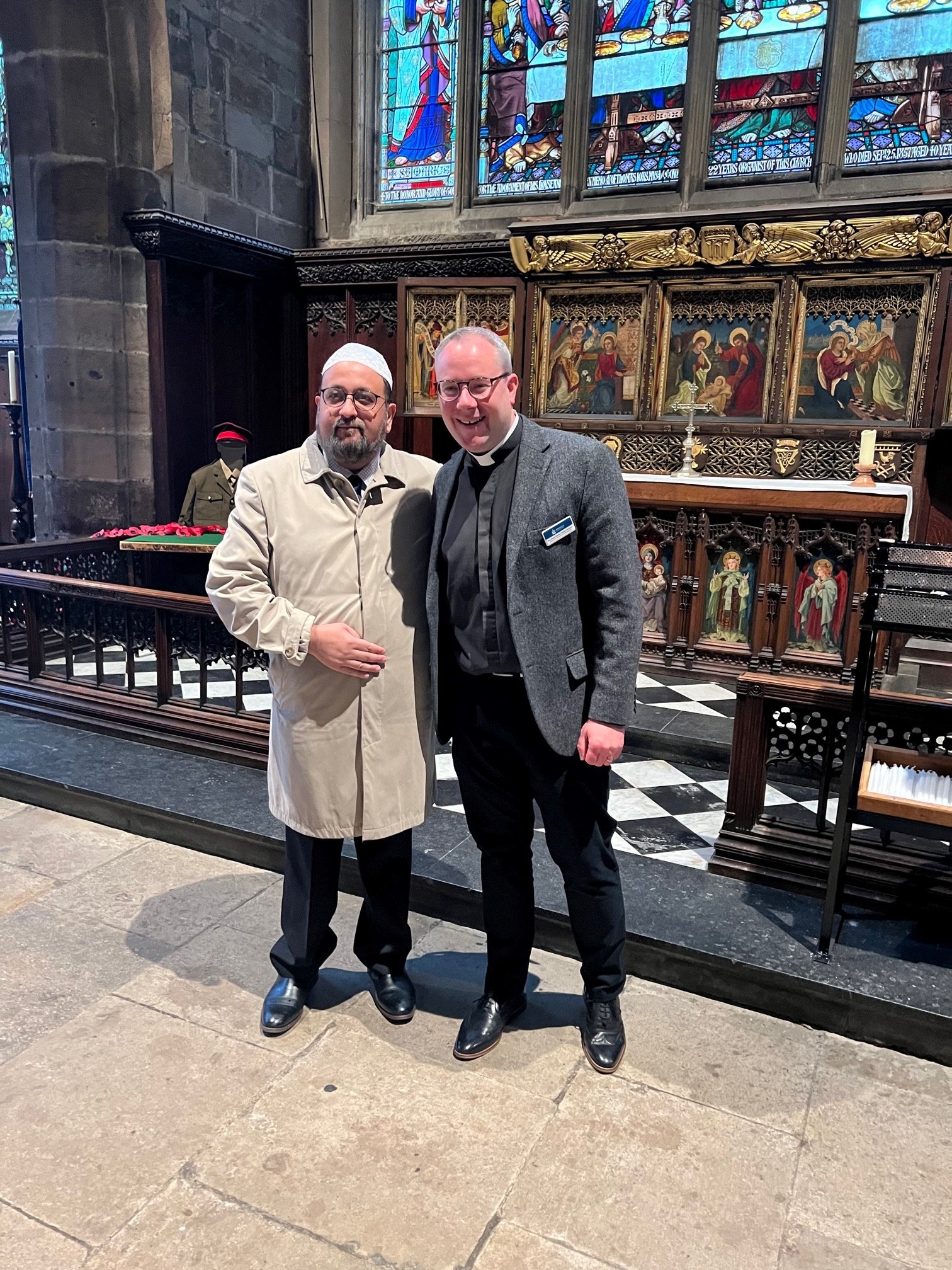 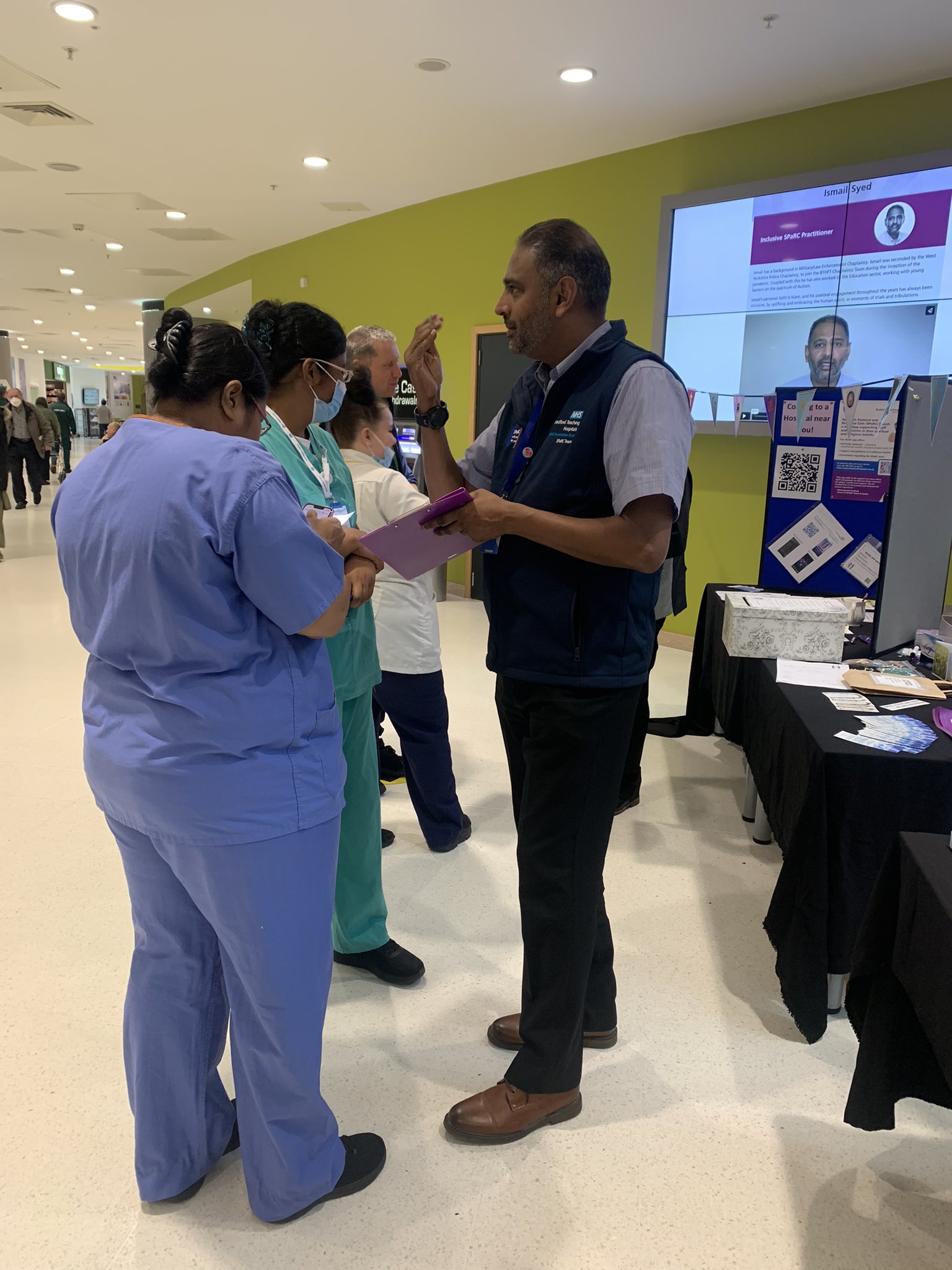 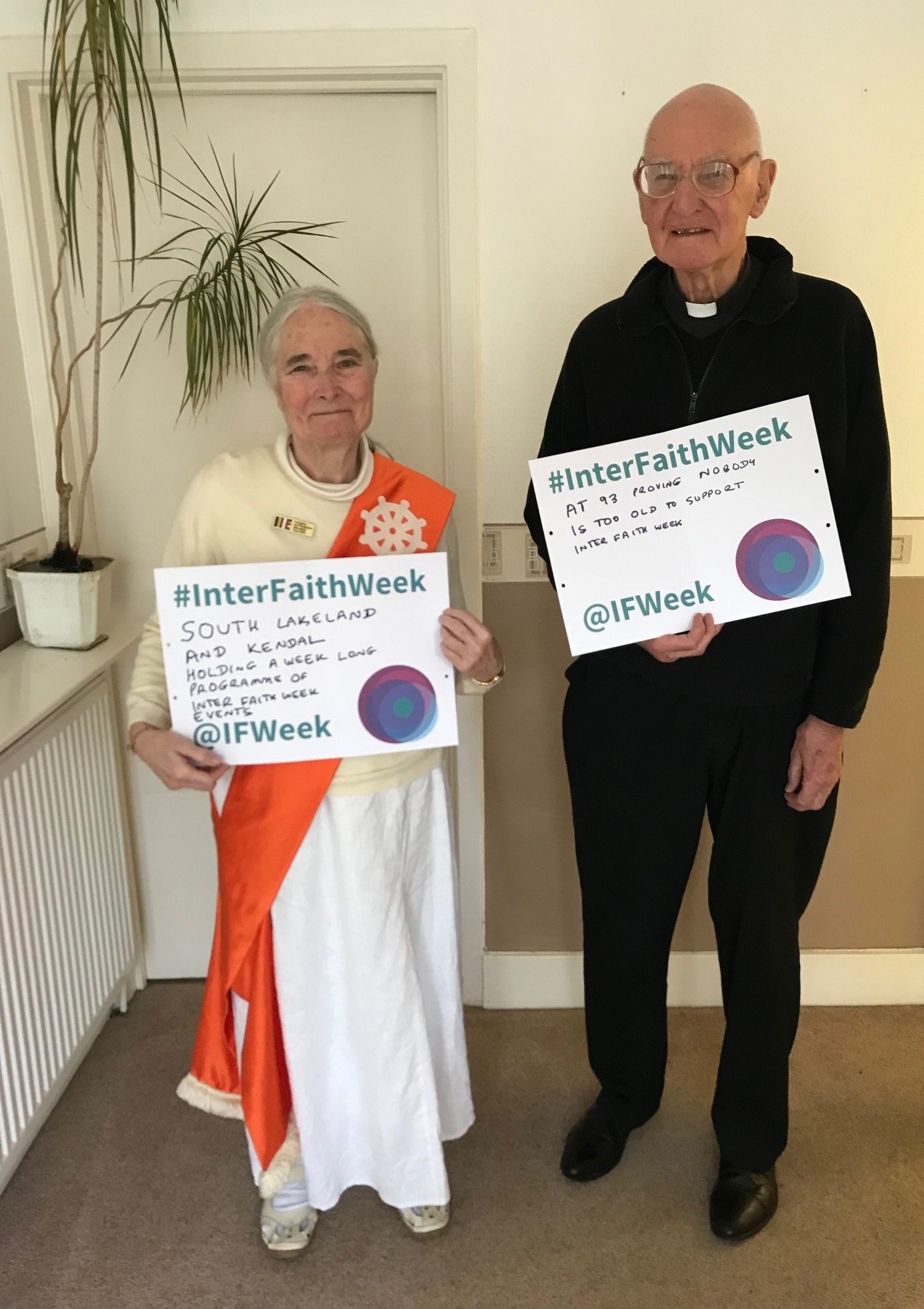 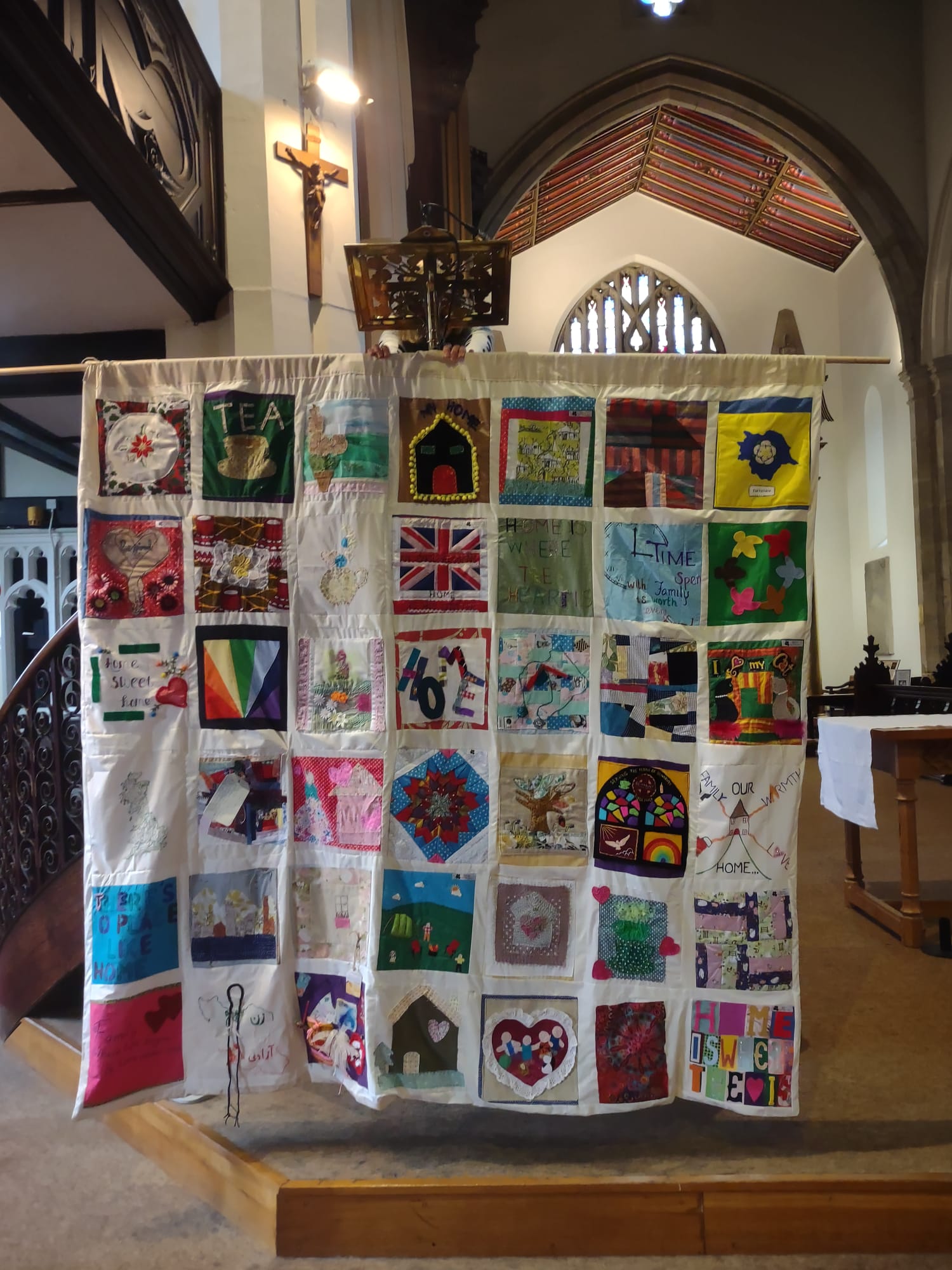 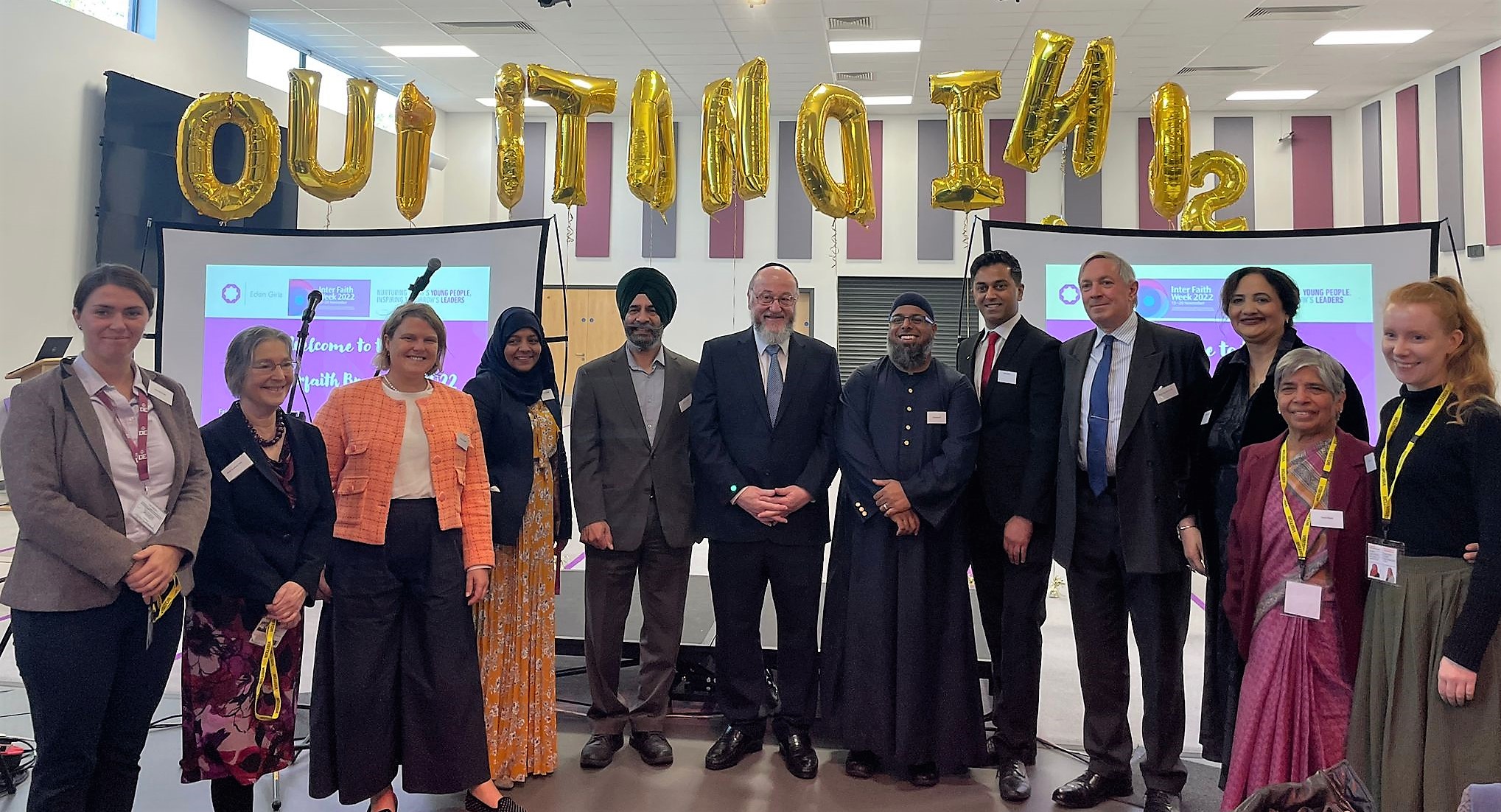 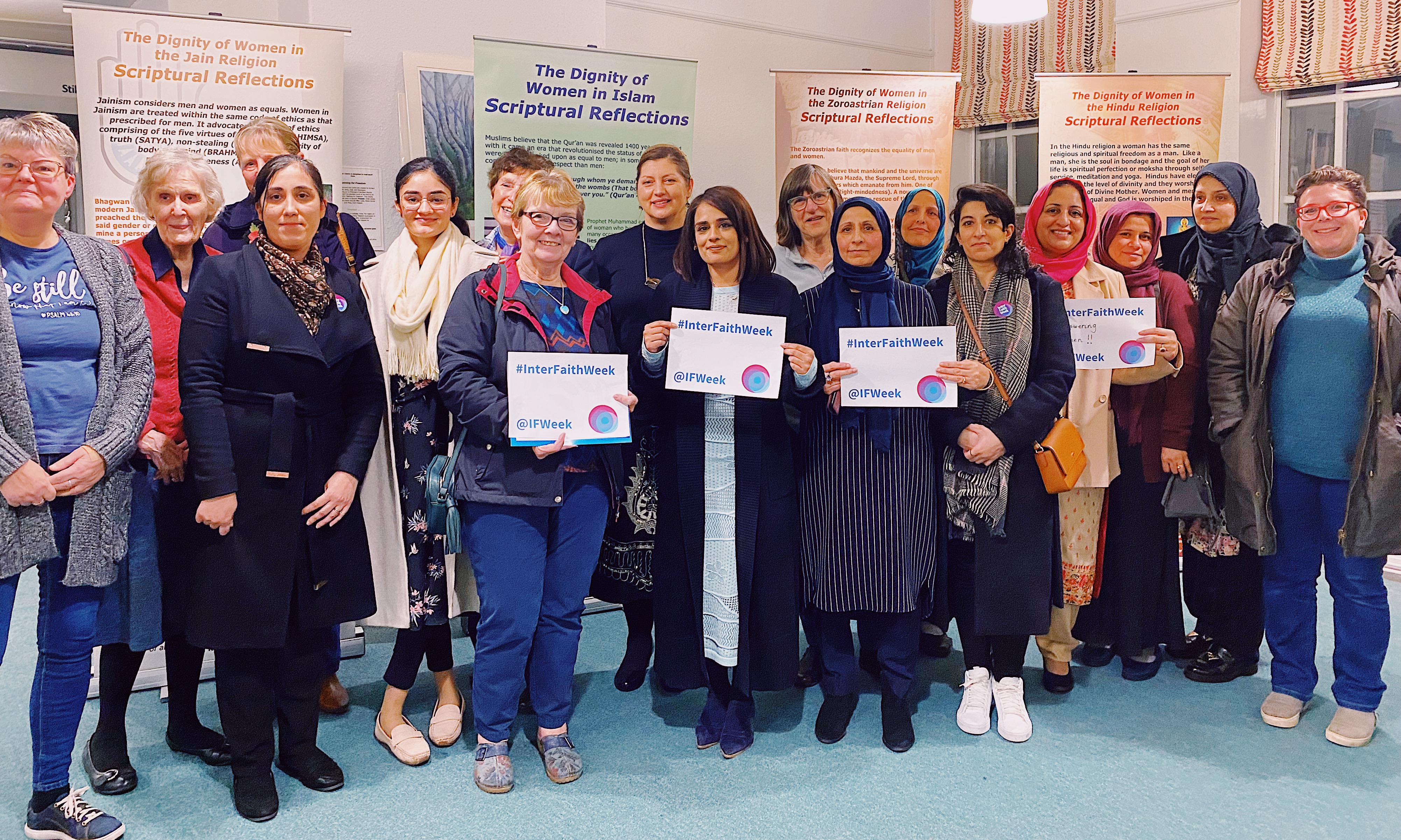 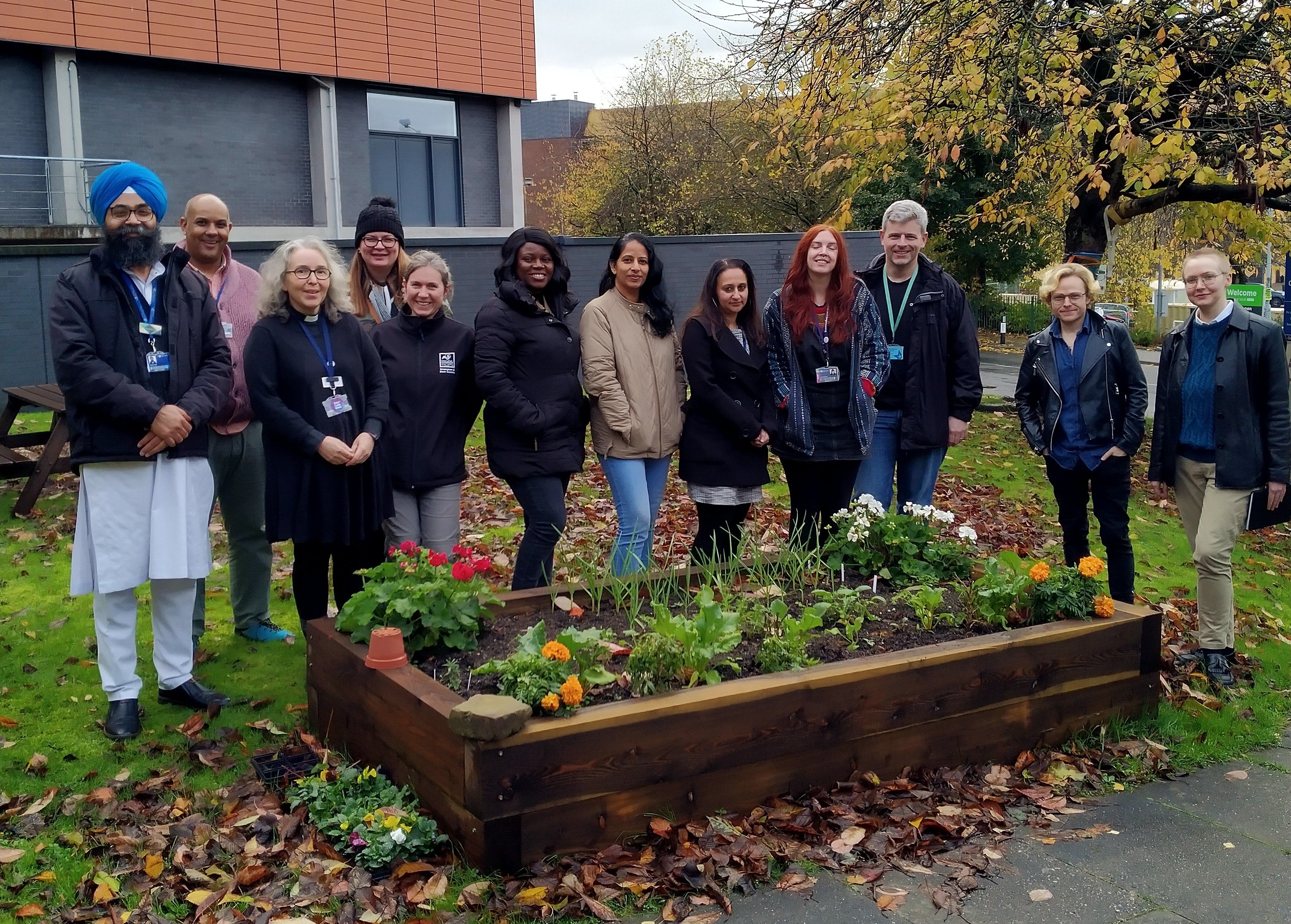 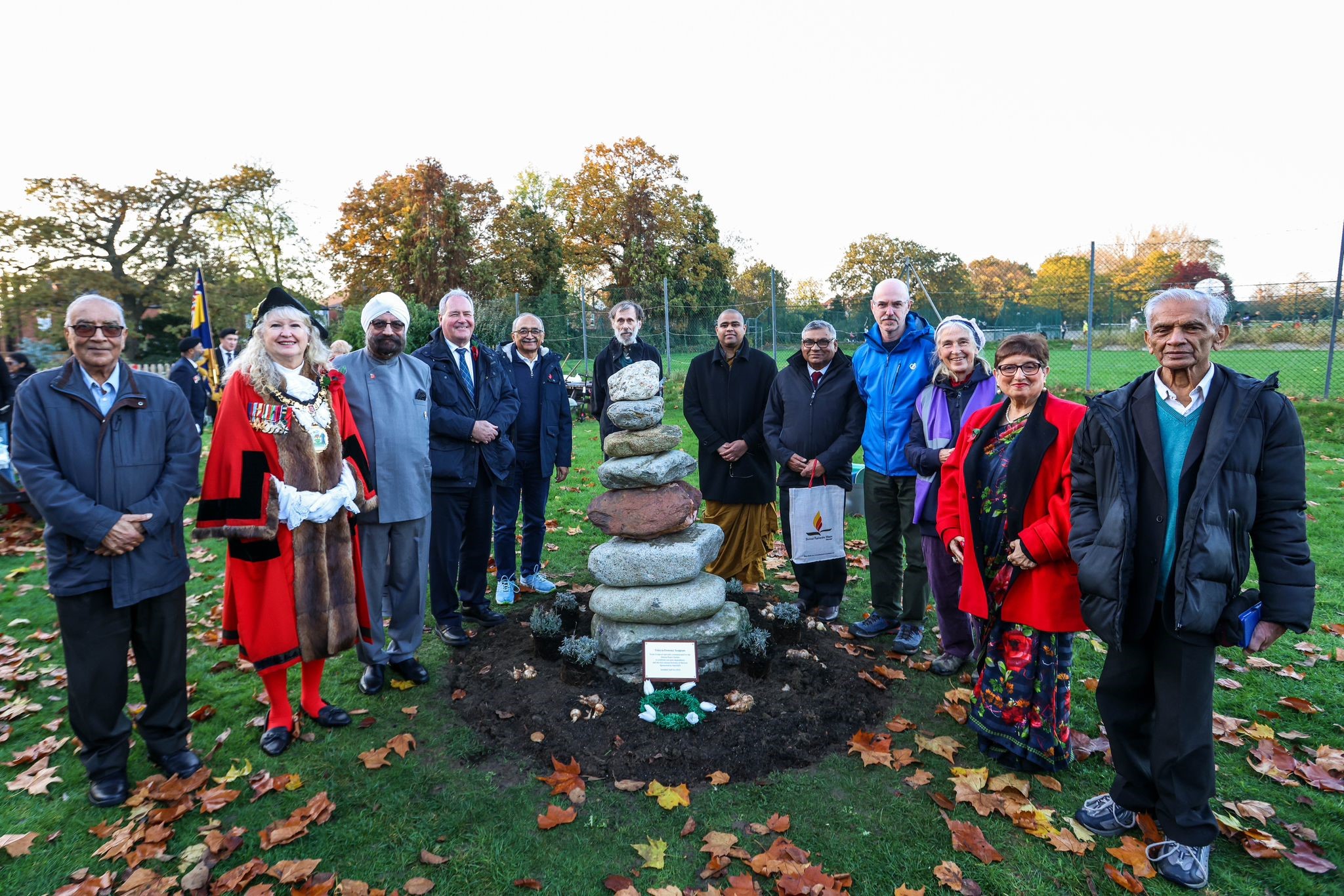 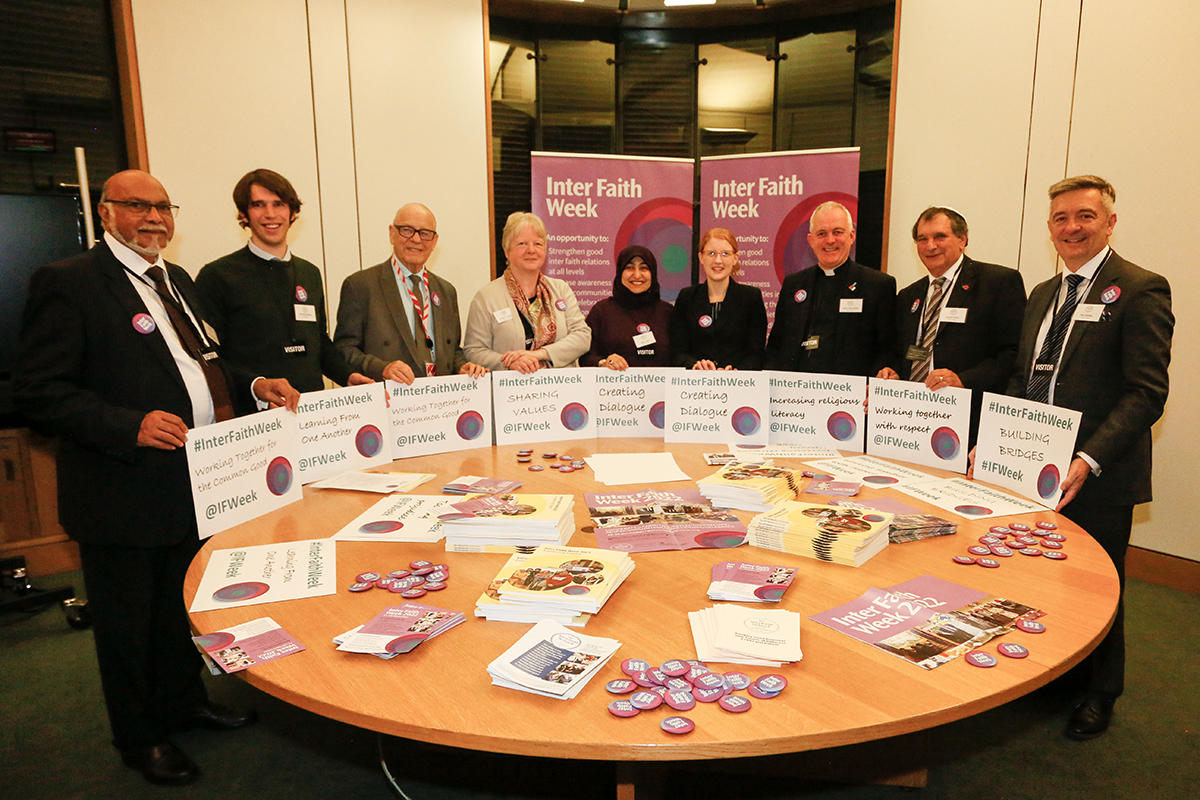