Ruth Foster is Project Assistant at the Inter Faith Network for the UK. Here, she reflects on events she attended during Inter Faith Week across London and in Belfast.

Ruth Foster is Project Assistant at IFN. She visited activities in different parts of London and in Belfast during Inter Faith Week. She writes:

"It was a true privilege to be a part of Inter Faith Week 2019. The events I attended in my role as IFN Project Assistant ranged from children’s craft activities to football to discussions around censorship and inter faith action for refugees. They gave a small insight into the different ways that communities across the UK come together during Inter Faith Week each year.

The first Inter Faith Week activity took me and my colleague Dr David Hampshire to an unlikely location - Emirates Football Stadium, where Arsenal in the Community had brought pupils from local faith schools together. Primary school pupils from North West London Jewish Day School and the Olive School had a tour of the stadium and played football before being treated to workshops led by sixth form and year 11 girls from Islamia Girls' School and Hasmonean High School. Each presentation group was made up of a mixture of girls from each school, who expertly used quizzes, sweets and games to teach the primary school children about different religious festivals. I was personally very impressed by the older girls and their ability to capture the attention of a restless audience of young schoolchildren. The day was rounded off with emotional goodbyes between the girls from different schools who had worked so hard on the presentation which included countless selfies being taken so that they would remember this special experience together.

The second Inter Faith Week event that I attended was the Islington Faiths Forum, Platform Youth Hub, Targeted Youth Support and Islington Council’s joint event at the Platform Youth Hub in Islington. The event took the form of a youth debate on the question "Does Social Media change your relationship with your faith and beliefs?”. Young people from Christian, Muslim and Buddhist backgrounds contributed. I was fortunate enough to attend this event alongside one of IFN’s Co-Chairs, the Rt Revd Jonathan Clark, who opened the event with a few words about Inter Faith Week and his own experience working in Islington before becoming Bishop of Croydon. The range of issues that the young people raised throughout this event – from mental health to faith to knife crime - highlighted the importance of placing youth-focused initiatives at the centre of inter faith learning and cooperation. In our ever more diverse country, Inter Faith Week gives young people a valuable chance to learn about each other’s backgrounds and beliefs. 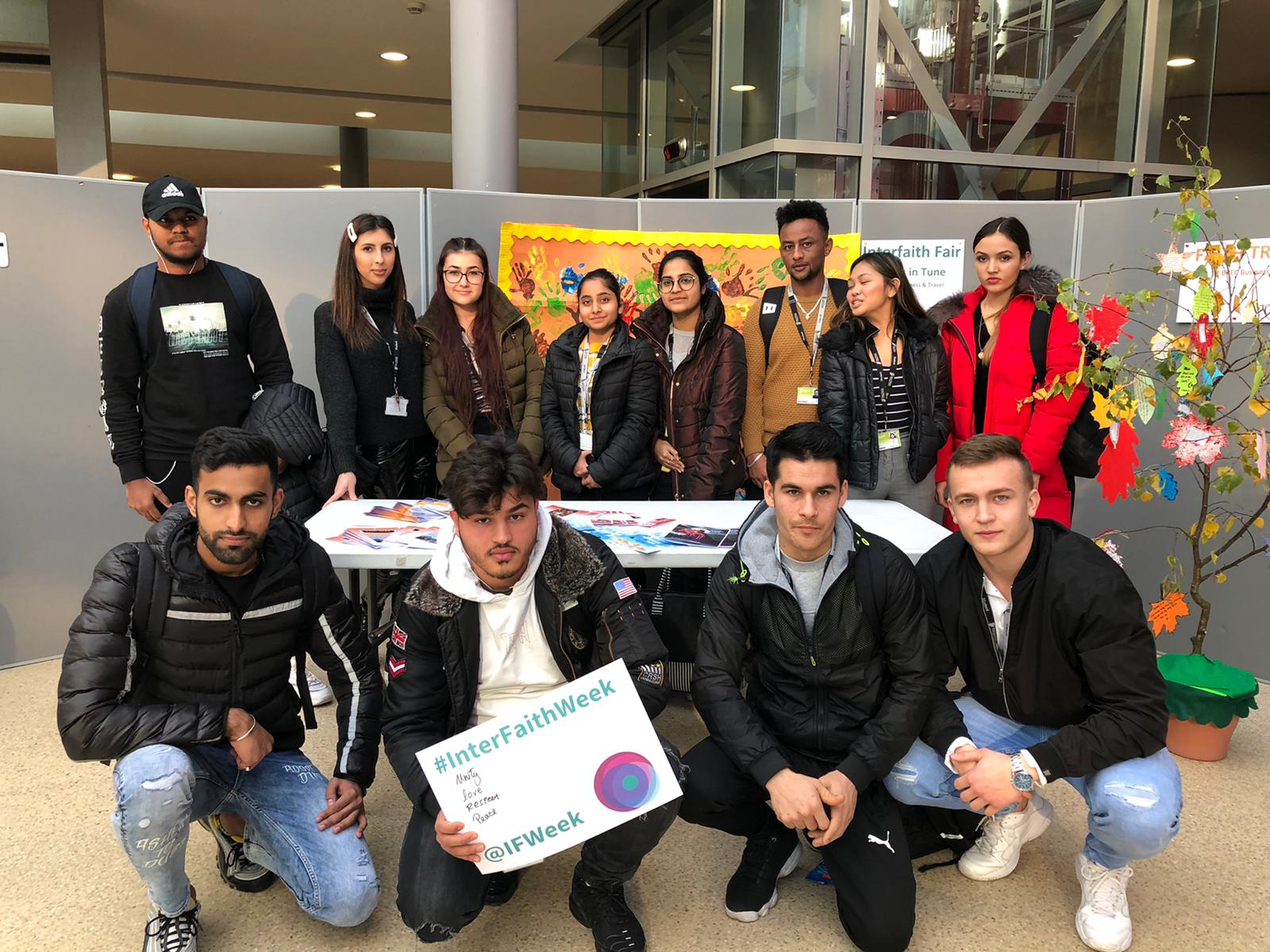 Wednesday of Inter Faith Week gave me the chance to see what educational institutions were doing to get their students excited about inter faith activity. I travelled to West Thames College in Isleworth, where a range of activities were being hosted by local faith communities and students, including a space for students at the college to educate their classmates about their religious traditions. Observing the consideration and respect with which students approached their classmates with questions about Orthodox Christianity, Catholicism, Sikhism and Islam was heart-warming. Set against the unique soundtrack of tabla drumming and Christian rap, this exchange somehow encapsulated both the importance and uniqueness of Inter Faith Week in celebrating diversity and commonality in the UK.

Moved by my time with young people at West Thames College, that evening I went to West London Synagogue to hear Barbara Winton, refugee rights campaigner, and Professor Tony Kushner from the Parkes Institute at the University of Southampton speak on the topic 'The Refugee Crisis Then and Now'. The talk was held by the central London branch of the Council of Christians and Jews, and included the travelling exhibition 'James Parkes and the age of intolerance'. What struck me throughout this talk was that although I was aware of the historical examples of inter religious cooperation to help refugees, the similar initiatives that exist today are often underreported. Inter Faith Week gives a good opportunity to celebrate this work as well as enabling a wider audience to learn about how they can get involved. 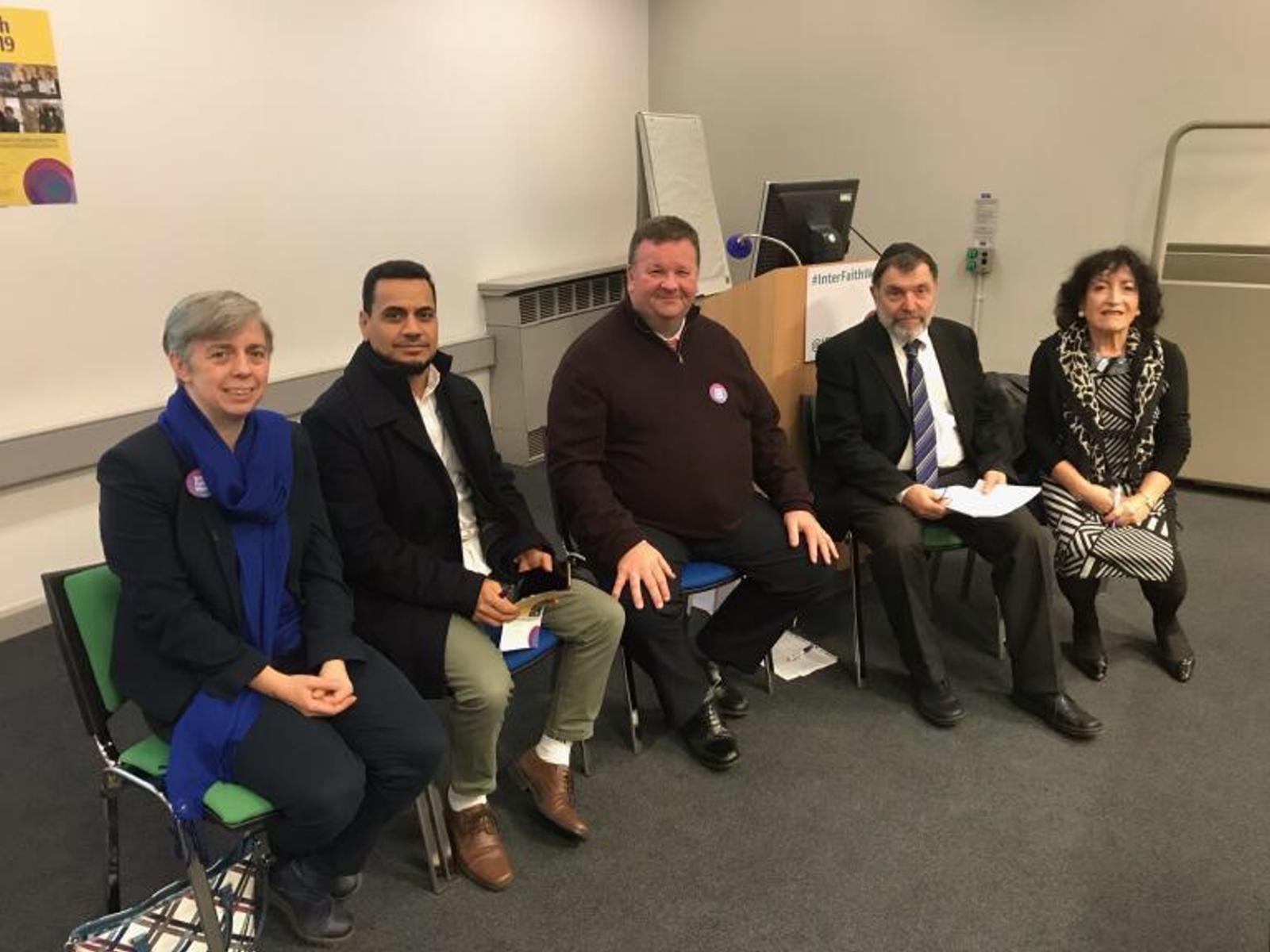 Having spent the majority of my Inter Faith Week in London thus far, on Thursday I was excited to travel to Belfast to attend the Northern Ireland Inter Faith Forum and Council of Christians and Jews Belfast Branch event on the theme of 'Religious perspectives on Culture, Community and Censorship'. The event was a discussion between representatives from Presbyterian, Jewish, Muslim and Latter-day Saint traditions. The evening provided an insight into inter faith relations in Northern Ireland, where community-level initiatives are often focused on divisions along sectarian lines. Having been born and raised in Northern Ireland, I left the event with a sense of pride for the steps that are being taken to develop good relations between different faith communities. 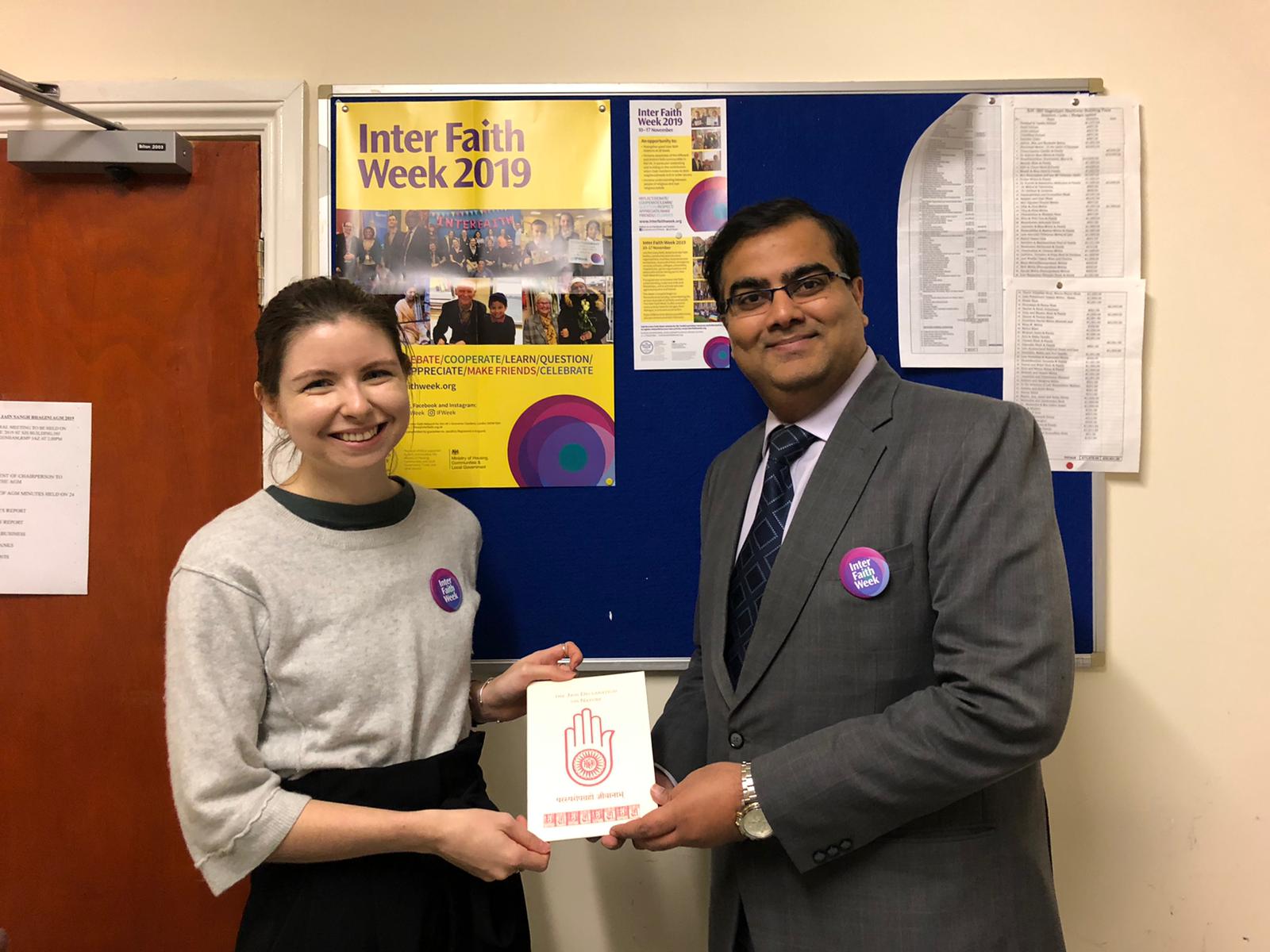 After a short but sweet visit to Belfast, it was back to London for me. On Friday I headed to Dagenham to visit the local Jain Derasar as part of the Barking and Dagenham Faith Forum’s borough wide visit my place of worship campaign for Inter Faith Week. It was here that I learned about Jainism, the Jain community in the UK and plans to expand their current Jain Derasar in Dagenham. Despite the small Jain community in the area, it was clear that Inter Faith Week provided community members with the opportunity to create new possibilities for partnership and friendship in their locality. 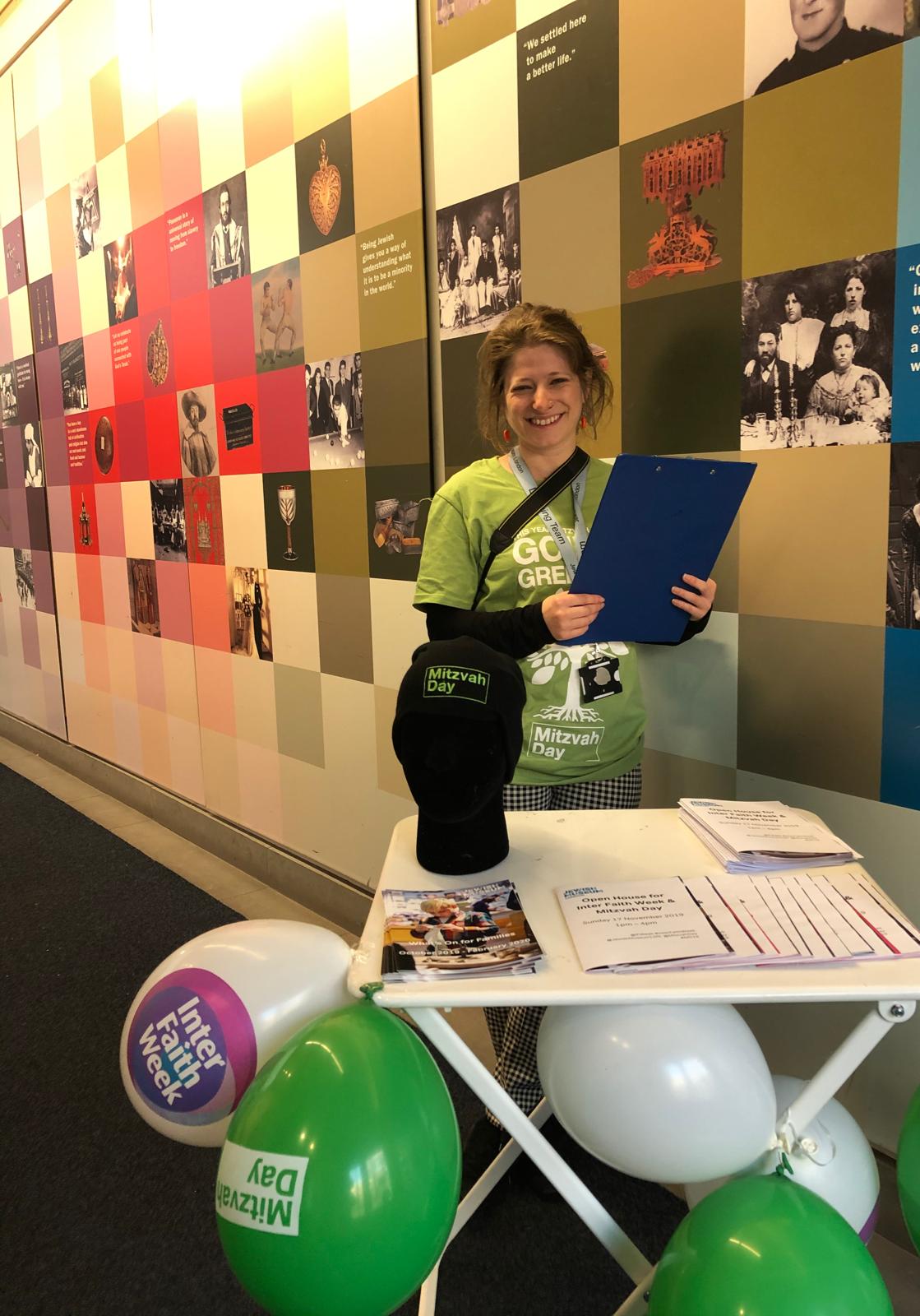 Mitzvah Day and Inter Faith Week being celebrated
at the Jewish Museum, London

The final day of Inter Faith Week was Mitzvah Day, an annual Jewish-led day of social action. Many events are held to mark both Inter Faith Week and Mitzvah Day each year. I was fortunate enough to spend the day at the Jewish Museum in Camden, where an array of activities were being held for children by teams from Westminster Abbey, St Paul’s Cathedral and the Museum of Methodism and John Wesley’s House. The activities included baking challah bread for a local homeless charity, designing a mini stained-glass window and making a wearable Bishop’s Mitre. I put my knowledge of the Hebrew alphabet to the test at the Hebrew scribing station, and explored the museum’s exhibitions, which were free to the public for Mitzvah Day and Inter Faith Week.

I was amazed and inspired by each of the event holders I met from across the country who dedicated time and energy to creating such a special Inter Faith Week. Wherever I went throughout the Week I was welcomed with open arms – and often invited to come back – reflecting the hospitality and positivity that are essential to building good inter faith relations at all levels."