Madiha Hussein is an Intern at the Inter Faith Network for the UK. Here, she reflects on events she attended during Inter Faith Week in Bradford, Canterbury, London, Leicester and Liverpool.

Madiha Hussein is an Intern at IFN. She visited activities in Bradford, Canterbury, London, Leicester and Liverpool during Inter Faith Week. She writes:

"Inter Faith Week 2019 was a very eventful week for me, and all of the events I attended were testament to the fantastic inter faith work being done across the UK. It was a real pleasure to be part of it. 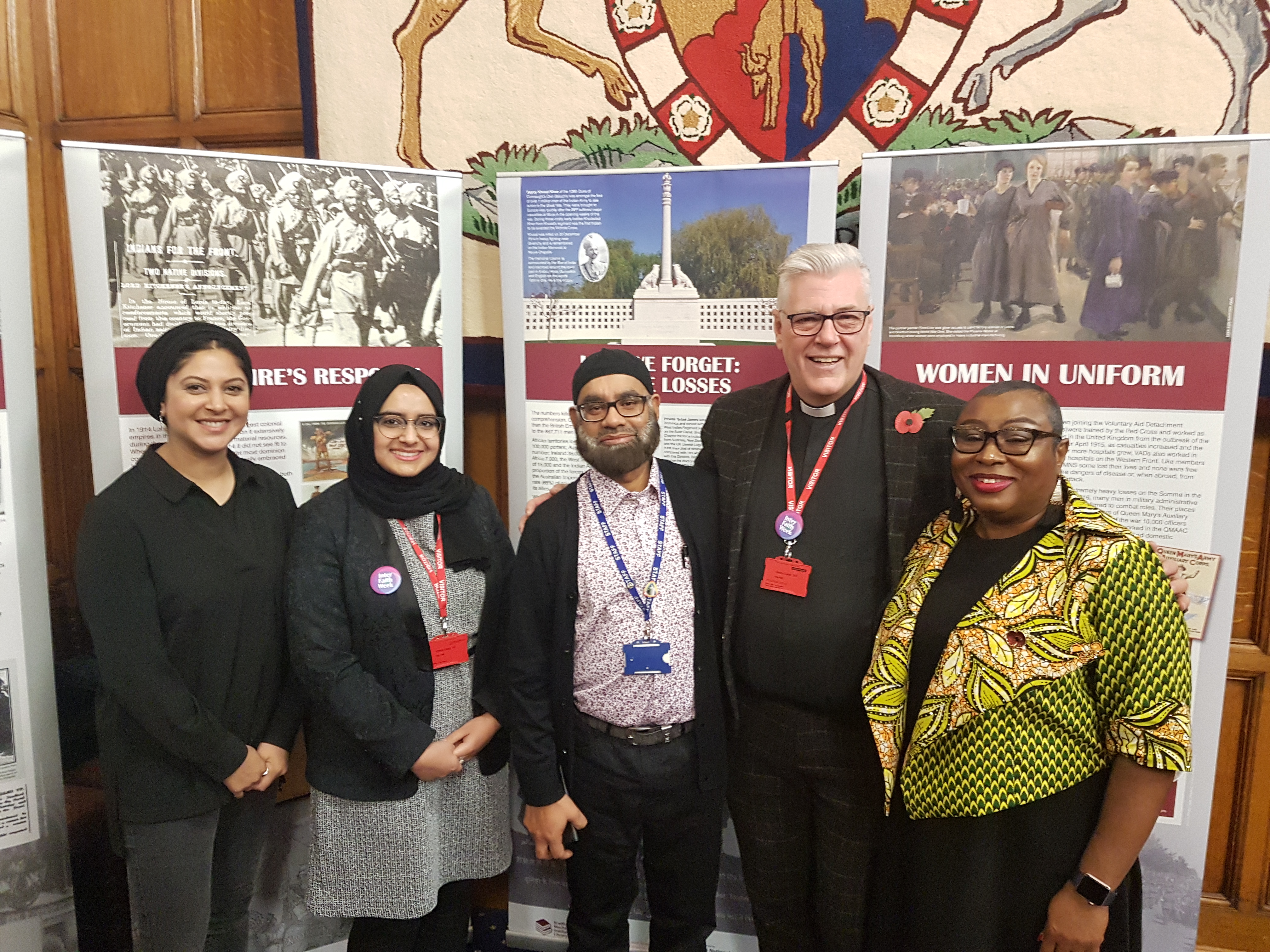 Madiha with partcipants and organisers of the event in Bradford

After weeks of preparations, the day finally arrived to attend my first event of the Week on Monday morning. I began the Week bright and early at Bradford City Hall for the Women of Faith celebration organised by Bradford Council and Believing in Bradford which I attended with my colleague Ashley Beck. Lord Mayor Doreen Lee opened the event by speaking of her pride in the achievements of the women of Bradford. She concluded her speech by recalling an African proverb that says, “If you educate a man you educate an individual, but if you educate a woman you educate a nation”.

The Chief Executive of Bradford Council then highlighted three important principles in shaping a successful community. These are to love thy neighbour, to build a ‘commonweal’, and to implement the concept of ‘nothing about us without us’. Professor Udy Archibong from the University of Bradford honoured the legacies left behind by women of faith, noting that Rosa Parks had to sit down to be noticed, as opposed to the conventional act of standing up. A key highlight of the event for me was witnessing a ‘friendship quilt’ made by the women of Touchstone Bradford. They described how as the quilt grew, so did their friendships. One contributor recited a heartfelt poem that linked the fiddly nature of weaving the thread through the fabric to the intricacy of forming inter faith relations that ultimately leads to a beautiful masterpiece of faiths entwined together. 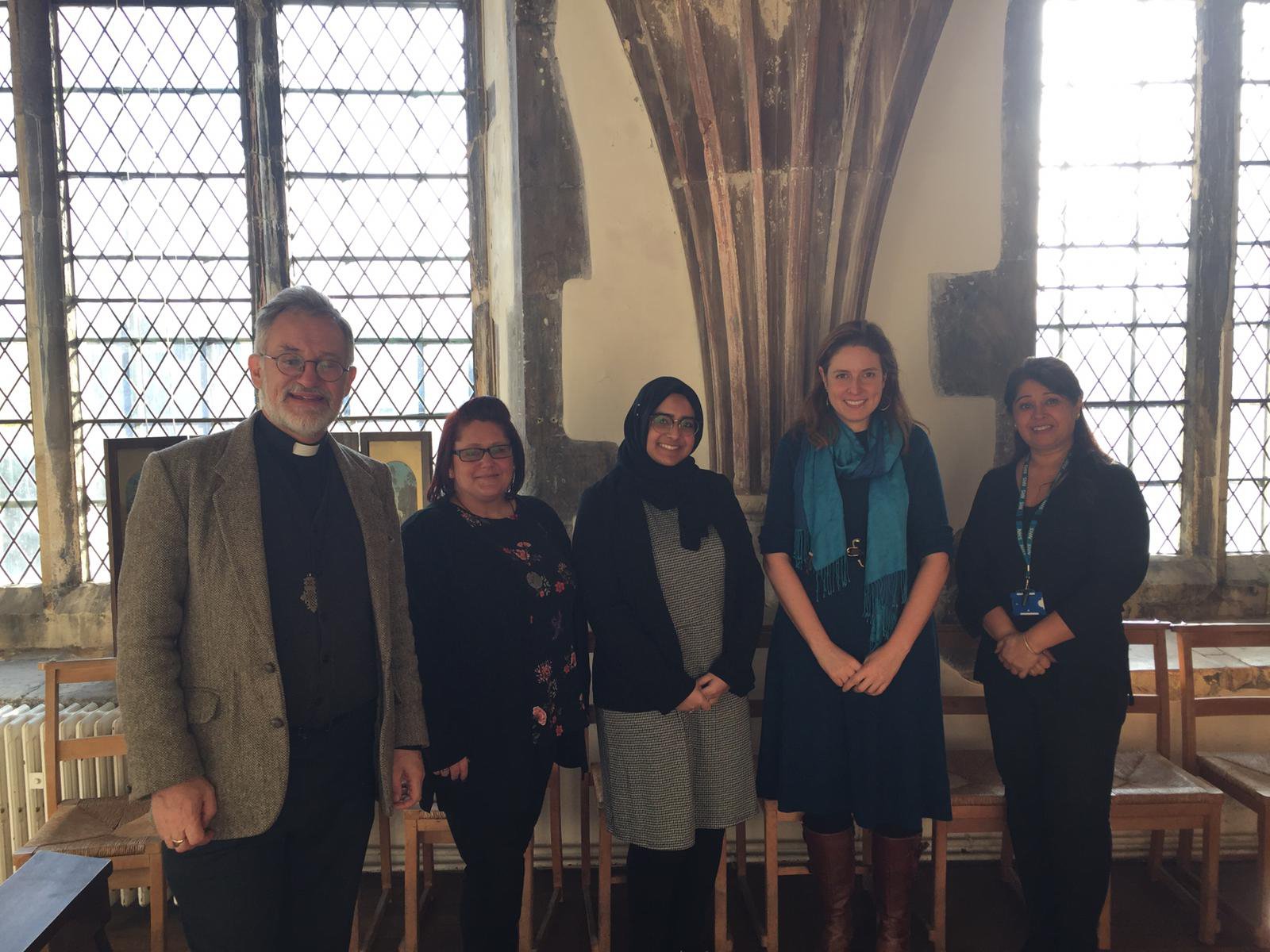 On Wednesday, I attended the Canterbury Cathedral Diverse Open Doors event organised by Kent County Council. We began the day by observing the Eucharist in the Crypt. We then participated in inter faith dialogue and discussion, led by the Revd Canon Dr Tim Naish. He began by providing information about the Cathedral and its ongoing restoration project, and went on to share personal stories of inspiring inter faith encounter. For Canon Tim, inter faith dialogue is not about mixing various faiths together, but about bringing them together and respecting and understanding one another. He also highlighted the fact that there is much diversity within one faith in itself, which makes intra-faith dialogue just as important as inter faith dialogue. After an enlightening discussion, we were free to explore the Cathedral to admire the beauty of both its internal and external architecture.

Having returned to London in the evening, I arrived at the Ministry of Justice for a Civil Service Inter Faith Celebration, organised by CPS Muslim Network and Prosecution Christian Fellowship. The theme for the  celebration was ‘building bridges’. Civil Service Faith and Belief Champion Clare Moriarty gave a warm welcome. She highlighted the need to discuss what faith means to each of us in order to develop personal connections that pave the way for a deeper, human understanding of one another. Rebecca Lawrence, Chief Executive of the Crown Prosecution Service (CPS), opened the event by reflecting on the importance of multi faith forums, and faith leaders working together, particularly during times of tragedy. For instance, in the aftermath of the Grenfell Tower fire, faith leaders were at the heart of the humanitarian response to the victims and wider community.

The panel of speakers was made up of successful and inspiring professionals from various faith backgrounds. An interesting point made by one of the panellists was that the term ‘neighbour’, in both a Biblical and legal sense, does not just refer to those in close physical proximity to you, but to anyone who is affected by your actions or omissions and thus, we owe a duty of care to all those around us.

On Thursday I visited St Angela’s Ursuline School in Newham for a student SACRE meeting on climate change, organised by RE Matters. It felt nostalgic to be back at a school, but this time as a visitor. In attendance were four secondary schools across Newham with students from various faith backgrounds. The students began with an exhibition task, in which they had to choose three pictures to illustrate one of the following: ‘enlightenment’, ‘harmony’, or ‘shalom’ (the Hebrew word for peace and wholeness) – or the absence of those positive states. I was asked to be part of the judging panel. It proved incredibly difficult to pick one worthy winner as each group made an intelligent case for the motivation behind their chosen pictures. In the end, the group who chose pictures that displayed the opposite of harmony won due to their creative flare in defining the word from a unique perspective.

Forest Gate South Councillor Mas Patel then spoke about the climate issue on a local level, emphasising that global problems require local solutions. He explained that Newham has the worst air quality in London due to carbon emissions from City Airport, the A406, and Blackwall Tunnel which are all within the vicinity of the borough. The children were made aware of how they would be the worst affected by air pollution as their lungs are still growing and developing. They were really eager to question the councillor and learn more about the local politics of climate change. 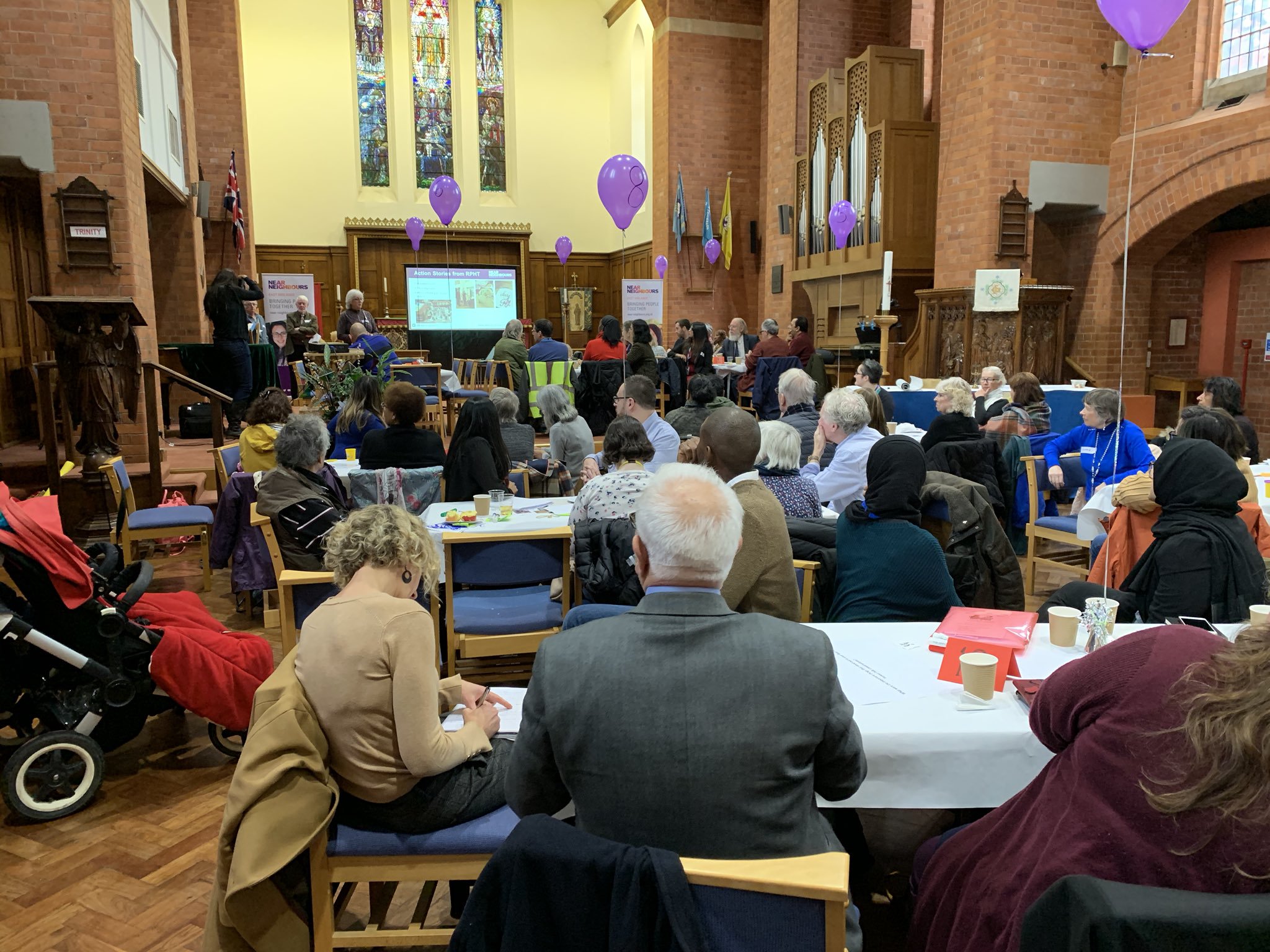 The Big Conversation in Leicester

I travelled to Leicester on Friday to attend the Big Conversation, which was the final event of the ‘Real People, Honest Talk’ programme organised by Near Neighbours and St Philip’s Centre. The event focused on encouraging inter faith dialogue on common concerns between our neighbours. The event was structured to break up the discussions with short entertainment pieces of spoken word poetry and musical performances. At this event, the concept of neighbours being those affected by our actions was again reiterated as an important point in the context of building community spirit. The table I was sat on had individuals from different parts of the UK, including Luton and Nottingham. This made for a fascinating discussion on concerns which various towns and cities shared, such as knife crime and homelessness. The solutions participants agreed on were to participate in community outreach work; set up youth bodies to tackle youth focused issues; mobilise places of worship; and engage in social action. 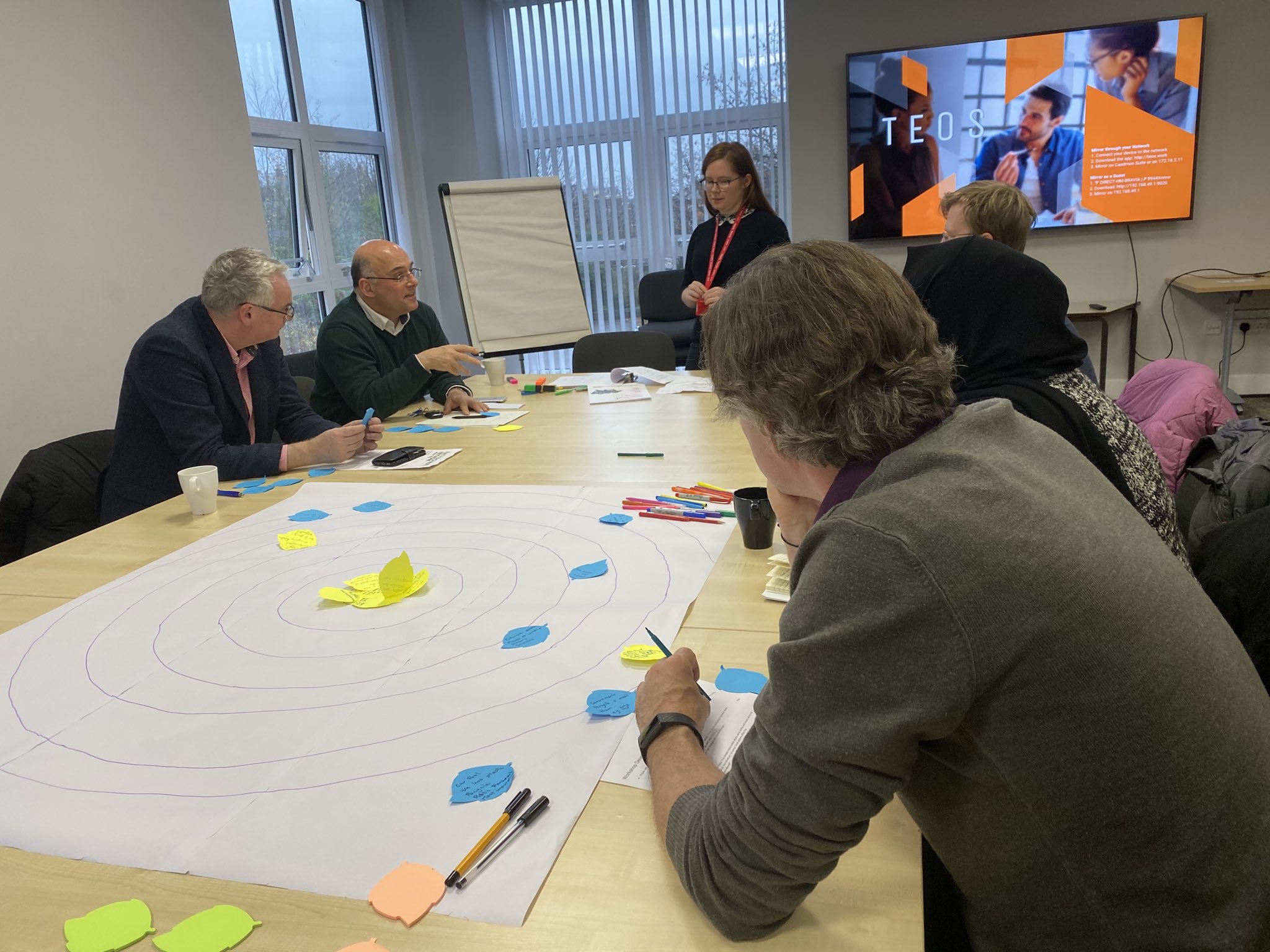 The final event I attended was the ‘Faith, Climate and Mitzvah Actions’ event in Liverpool organised by Faiths4Change, the Diocese of Liverpool, the Merseyside Faith and Climate Network and Mitzvah Day. It was great to attend another climate focused event, as the environment and climate theme was a prominent feature during Inter Faith Week 2019. Professor Ric Williams from the University of Liverpool explained how the impacts of a 1.5˚C temperature limit differ from those of 2˚C, and that action needs to be taken by companies, governments and individuals. I was interested to learn that the Great London Smog in 1952 that led to nearly 12,000 deaths was a catalyst for air pollution controls through the passing of the Clean Air Act of 1956.

There was then a series of ‘soapbox talks’ from various faith traditions. The first was by representatives from Liverpool Region Mosque Network. They described the work they have done in raising awareness of the climate crisis, such as during Friday prayer sermons. They have also set up a ‘Green Deen’ project in local mosques to create spaces to plant trees, save water, and to encourage recycling and the use of city bikes. A thought-provoking question was posed to the audience: Are we wasting our natural energy resources, such as the sun? On the same theme, Annette James from Christ Church, Toxteth Park spoke of the eco-friendly work her church has done which had earned the Eco Church Gold award. This included setting up marquees inside the church for small congregations that were far less wasteful of light and heat, as well as digging up the tarmac around the church in order to plant flowers and fruit for the local community to harvest and enjoy."