Kirsty shares her Week 'journey' which took her to Bradford for a Near Neighbours Wellsprings Together celebration and to online participation in a Birmingham theatre/poetry workshop held by My Heart is in The East and partners; a Fermanagh and Omagh District Council,and Fermagh and Omagh inter faith group learning dialogue; and events at three places of worship arranged by Bromley Three Faiths Group.

"This was my first experience of IFW and I was excited to see what the week had in store.

Monday began with an Inter Faith Network for the UK Roundtable on Women’s Local Inter Faith engagement. It brought together participants from fifteen organisations: some freestanding women’s inter faith initiatives and others which are women’s groups linked to local inter faith organisations.

The women, and men, present shared the reasons the women’s initiatives had been formed and their views on the importance of women in building good inter faith relations. They also shared details of some of their work: from a ‘Weaving Women’s Wisdom’ rug exhibition in the Houses of Parliament and weekly coffee meetings to launching a Faiths Against Domestic Violence Campaign and much more. The information and views shared was clearly found helpful by participants and it will also feed into research I am doing on this area to support IFN’s aim to support and encourage good inter faith relations.

The roundtable was an inspiring way to begin the week and left me eager to hear and learn more about the inter faith work being done and celebrated in Inter Faith Week. 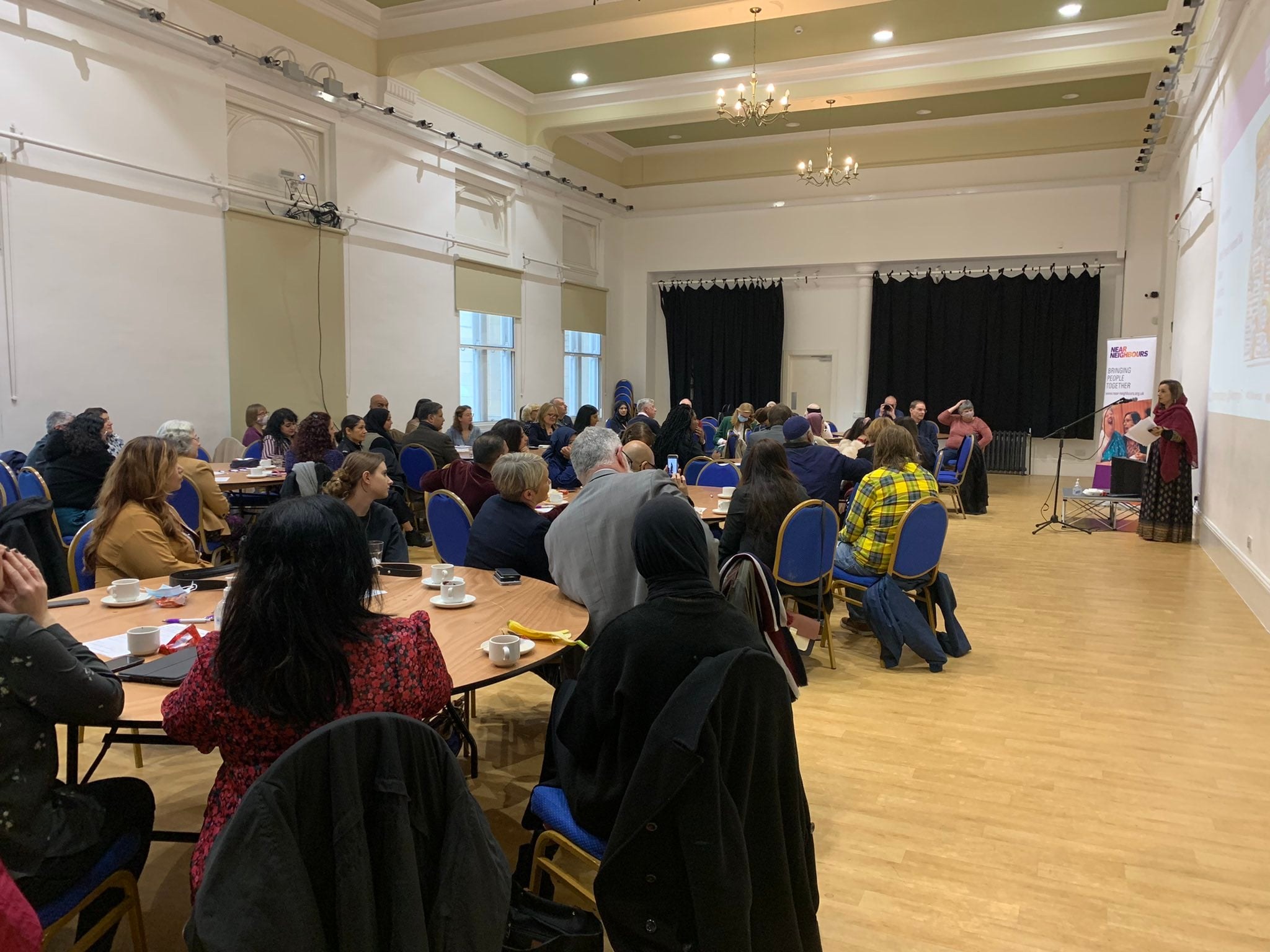 Tuesday saw me on an early train to Bradford on the way to a Near Neighbours 10th Anniversary Celebration Event at the Kala Sangam. The event began with a word of welcome from the Rt Revd Toby Howarth, Bishop of Bradford Diocese of Leeds, Church of England. He spoke of the community of communities created by Near Neighbours and of the fun, enjoyment, laughter and shared vision that communities had experienced throughout the last 10 years. He also talked about the empowerment of women that Near Neighbours had helped bring about, supporting women to come forwards as leaders in the community.

Kaneez Khan, Near Neighbours Coordinator for the West Yorkshire Hub, then spoke about the positive changes and opportunities that had come about in communities with which Near Neighbours had worked. Her passion and love for her job and the communities shone through as she spoke about both successes and challenges that the last 10 years had brought.

In celebration of the journey of the last 10 years, Near Neighbours’ first ever applicant, Sarah Hilton spoke about the community garden, a space of peace and beauty, that the first Near Neighbours grant had enabled to come to life. The garden continues to thrive and has been regularly visited throughout the COVID pandemic. She commented that when the garden was first created, benches had been installed 2 metres apart; this by chance had enabled the garden to provide an oasis of green calm and friendship during the COVID pandemic at the time of social distancing.

Poetry from Amria Khatun was performed which spoke to the importance of sisters and communities and working together – the text of the three poems is available here: https://twitter.com/kaneezkhan31/status/1461833970971250702

Heather Nelson of BLACK HEALTH INITIATIVE, based in Leeds, spoke about her organisation, which had been the recipient of the National Diversity 2020 award for Community Organisation Award for Race, Religion and Faith. She shared its work researching underlying issues and barriers facing BAME communities which affect decisions and choices in the context of COVID 19. The Black Health Initiative also trains individuals to speak up for themselves and to use their voice.

Over the course of the event, attendees were treated to two musical performances by two young women engaged in Near Neighbours funded projects. Elone Gangal, a volunteer with Catch, performed a song she had written in Romanian. She spoke about how she wished for, and was working towards, breaking down barriers between the Romanian Gypsy community and others by working with young people. Chante Amour, part of Expressions Show, also sang a song she had written.

Revd Mark Umpleby of North Kirklees InterFaith spoke about the work being done in in Batley and the challenges of continuing to build good relations after the killing of the late Jo Cox MP. He shared how an inter faith friendship walk had inspired local schools to hold their own friendship walk with over 1000 people in attendance. He talked with pride about the inter faith work being done in his community, such as the work being done in twinning Mosques and Churches and the community iftar. His closing words were centred on how communities were working together to implement change and forge a ‘community of communities’ and the importance of that.

An Inter Faith Week appeal for women refugees was presented by the Revd Jenny Ramsden of the Touchstone Bradford, who is also the Interfaith Advisor for the C of E Diocese of Leeds. That Saturday, faith communities from Leeds and Bradford would be gathering to pack the donations ready for delivery as part of a project that was for Mitzvah Day and Inter Faith Week. It was amazing to see the words spoken just moments ago, being actualised and lived daily by the people around me. 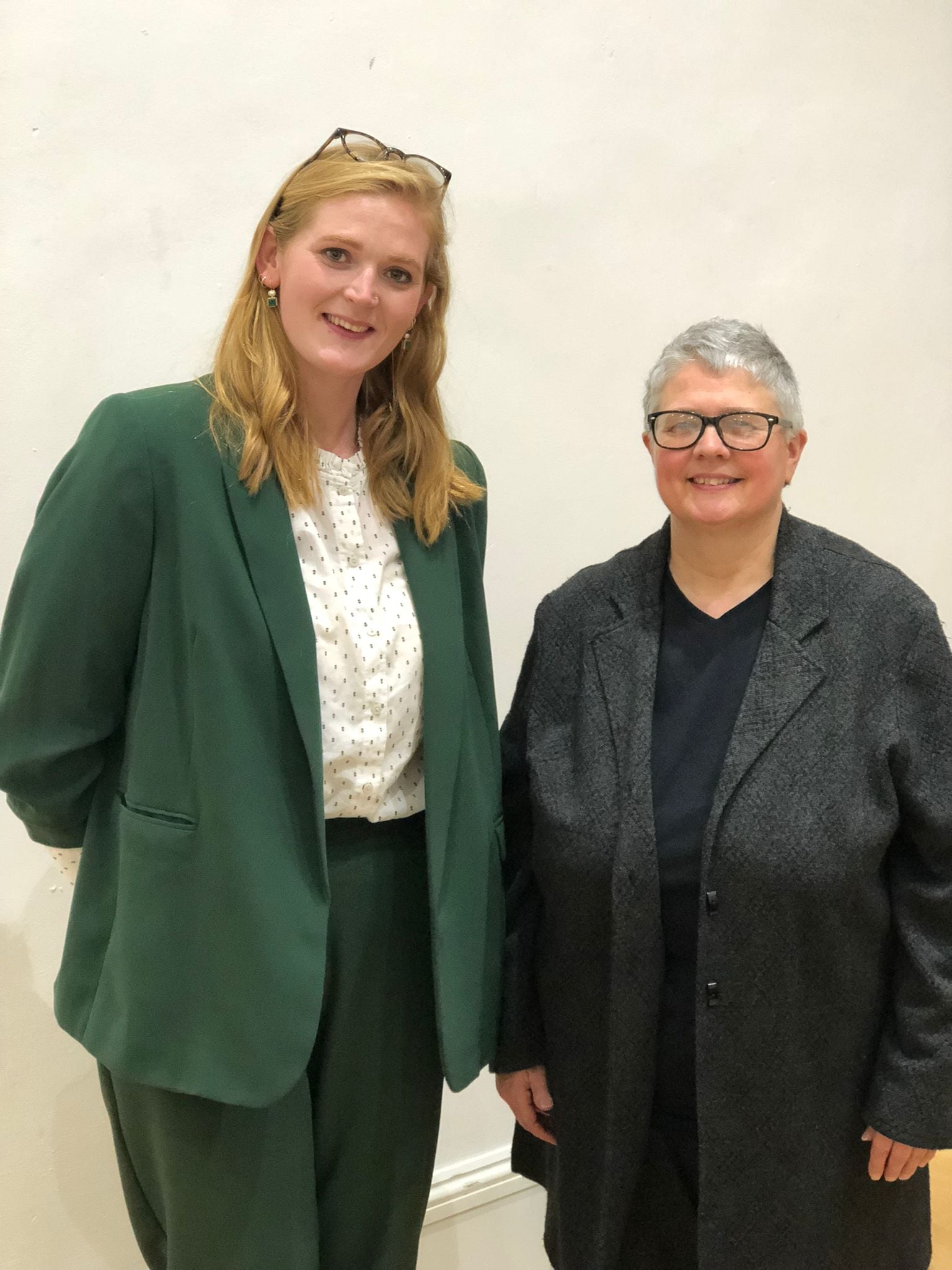 Closing the event, the Revd Liz Carnelley, Near Neighbours’ Director of Partnerships, spoke of the desire to connect Near Neighbours communities to others around the country and build links between them. She also spoke about the importance of grassroots organisations’ experience in shaping national policy.

A delicious lunch was served and people ate and networked joyously!

The event also afforded me the opportunity for a conversation with Jenny Ramsden and Shamim Akhtar about the important work being done with women at the Touchstone Centre, which supports local women to use their voices and create meaningful and lasting friendships through a variety of creative activities.

After the event had come to a close, I wandered up the hill to visit Bradford’s impressive Cathedral, perched high over Bradford. It was a great coincidence (or not?) that during Inter Faith Week, a photography exhibition from a Muslim photographer (Ms Nudrat Afza) about Bradford’s Jewish community and synagogue was being hosted in a Cathedral. On a plaque near the exhibition, it was noted that funds were being raised for the upkeep of the Grade II listed Bradford Synagogue accompanied by a note from Ms Afza saying “This place matters to us all”. Bradford Cathedral

The exhibition was called ‘Kehillah’ (meaning ‘congregation’ or ‘community’ in Hebrew) which struck me as incredibly fitting end at the end of the day’s events at Kala Sangam. 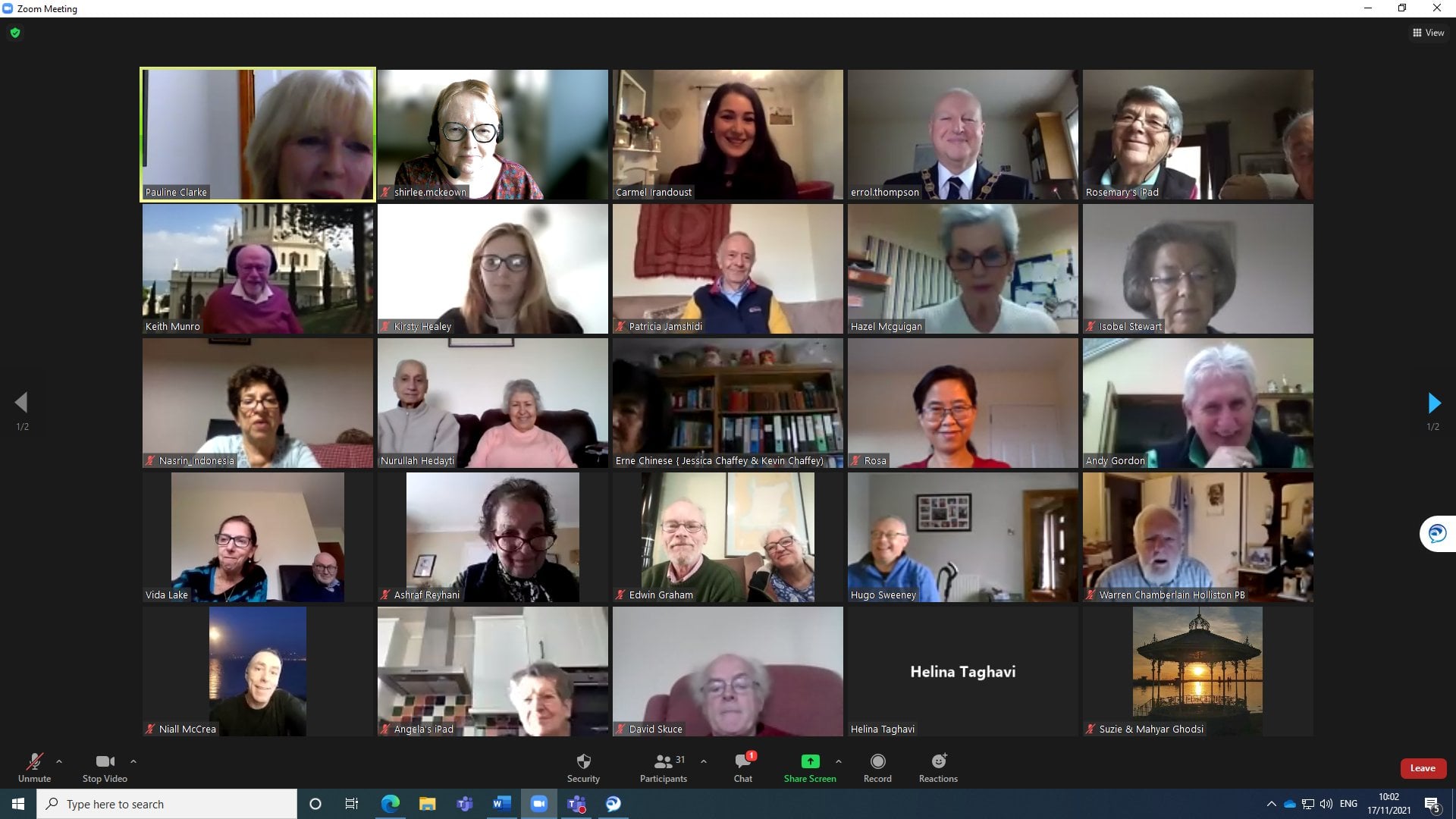 I attended an online talk and film screening of ‘Luminous Journey’ to mark the 100th Anniversary of the passing of Abdu’l-Baha, Head of the Baha’i Faith from 1892 to 1921 and eldest son of the Prophet-Founder of the Baha’i Faith. The event was organized by the Fermanagh and Omagh District Council, in conjunction with Fermanagh and Omagh Interfaith group. People joined the session from Northern Ireland and from as far away as America and Indonesia. The guest speaker, Carmel Irandoust, ex Secretary General of the Baha’i International Community in the Holy Land, spoke about Abdu’l-Baha, his childhood, family, exile and persecution, his imprisonment and later his release and travels and teaching. A film called ‘Luminous Journey: Abdu’l Baha in America, 1912’ was shown. This can be seen here.https://www.youtube.com/channel/UCx4Vj0KUNSYBc1lY7_UAVyQ UK Baha'i Office of Public Affairs

Attending this event was a great learning experience for me. It was so interesting to hear the life story of Abdu’l Baha and to understand the respect and reverence he was, and is, held in by the Baha’is and those he met in his lifetime.

Thursday evening I attended an online poetry and storytelling workshop with My Heart is in the East (MHiiTE) Project, Birmingham Council of Faiths, The HEAT Collective, The Fence and Az Theatre. MHiiTE is set in the Arab/Jewish/Christian world of 10th Century Cordoba. Inspiration for parts of it were drawn from a fragment of poetry found in the Cairo Genizah, the only known medieval Hebrew love poem written by a women, the wife of of Dunaš Ibn Labrāṭ. The poem can be found here: https://cudl.lib.cam.ac.uk/view/MS-TS-NS-00143-00046/1

The workshop began with a short performance of a poetic segment of the play from two actors, one of whom was Jessica Litwak, the author of the play and the workshop facilitator. The section performed was of an exchange between two poets, a Jewish woman and a Muslim man.

The performance served as inspiration for the guided writing workshop which followed reflecting on inter faith dialogue today and how one can learn from the other. There was a writing prompt of “What does inter faith mean to me?” It was interesting to hear other attendees from different faiths, Baha’i, Jewish, Christian and others, reflections on this question. Words and phrases were collected and served as a shared source of inspiration for the group to draw on in the guided writing time in which each attendee wrote their own poem which was shared with the group.

The Bromley 3 Faiths Group (B3FG) Invitation Weekend saw all members of the B3FG and local Jewish, Muslim and Christian neighbors invited to attend services at the Mosque, Synagogue and Parish Church. I joined online the Al Emaan Centre’s Friday Morning Prayers. Imam Abdullah Hasan recited prayers and gave a sermon speaking on three important factors in Islam; spreading peace, even in every greeting and handshake; looking after the needy through charity; and the importance of prayer. The Al-Emaan Centre is located in an old Methodist Church which closed in 2010 after 190 years before the premises was sold to the Muslim community.

Continuing the B3FG Invitation Weekend, I attended Bromley Reform Synagogue's Shabbat (Saturday) Morning service which was led by student Rabbi David-Yehuda Stern. Prayers were recited and the Torah was taken out and carried around the Synagogue after which a passage was read from it. Student Rabbi Stern gave a sermon about the passage, which related to fractured relationships between brothers and the healing of such relationships. The congregation and visitors who had joined in person then went to hear Kiddush (blessing over wine) being recited and shared food together.

The last place of worship to host the B3FG invitation weekend was St John the Evangelist Bromley where Vicar Andrew McClellan had invited visitors to the Parish Communion service that Sunday. Prayers and hymns were sung, passages from the Bible were read and Revd McClellan gave a sermon. Communion was then shared by those who wished.

Over the course of the week, the variety of learning experiences I had made me reflect on the impact of Inter Faith Week on individuals and communities. The events had connected people across localities, across the country, and from different faith communities. They had sparked conversations, art and poetry and created shared experiences, highlighting core elements of unity, community, and curiosity.
Inter faith week was truly enjoyable and inspiring experience.