Ashley Beck is the Inter Faith Development Officer at the Inter Faith Network for the UK. He leads for IFN on Inter Faith Week. Here, he reflects on the Week overall, and on activities he visited across the UK.

Ashley Beck is the Inter Faith Development Officer at IFN, and leads for IFN on Inter Faith Week. Here, he offers some reflections on the Week and then on his visits to Perth, Bradford, Blackburn, Watford to two events in London. He writes:

One of the great joys of the Week for me personally is that it is still a time which surprises, delights and teaches me new things. Like a great many of those who organise Inter Faith Week activities I am involved with inter faith activity year-round. However, the Week focuses and concentrates and it provides a festival-like experience that encourages and inspires, and provides fresh impetus for this vital work.

In part, this festival experience comes through attending activities. Like the rest of the IFN team, I was privileged this year to be able to visit and participate in activities as diverse in their content and approach as they were in their geography. I attended events which included music and dance, poetry readings, sharing of stories and experiences, visits to places of worship, planting trees, sharing food (including an award winning chocolate truffle!) and study of scripture.

When I am not attending events, one of my main roles during Inter Faith Week is running our @IFWeek social media accounts on Twitter, Facebook and Instagram and monitoring all the traffic mentioning Inter Faith Week. We do this to amplify the impact of posts (through likes, shares, re-tweets and inclusion in curated collections); build up a picture of the experience and feel of the Week; and to help us report effectively on the Week.  Gathering data to report is important - last year, around 15% of the activities we found out about were because of a single post on social media which we were able to follow up.

A lot of detailed and very geeky analysis will soon be done on all of this data. But the immediate benefit to finding and reading every tweet, post and gram linked to the Week in almost-real-time is that we get another window onto the incredible range of activity that takes place, and the enormous reach the Week now has in communities across the country. Overwhelmingly, posts about the Week are positive, and they demonstrate clearly the immense diversity of people who get involved, of many faiths, beliefs, ethnic backgrounds, cultures, ages, genders, sexual orientations, and socio-economic backgrounds.  All of this contributes further to the ‘festival’ atmosphere.

Like any good ‘festival’, Inter Faith Week involves a gargantuan human effort to pull off each year, and most of that hard work is very much behind-the-scenes. But it is also a source of change, inspiration and renewal for those who take part. Each year, people dare to try new things during the Week, whether it is the school or workplace trying ‘inter faith’ for the very first time or the seasoned inter faith group tackling a topic or issue they are nervous about going near. Some of the experiments work brilliantly; a few do not. All enable learning and growth. Each year, too, people learn new things, build new relationships, and dream new dreams of what might be achieved together.

My Inter Faith Week began with Interfaith Scotland in Perth with the launch of Scottish Interfaith Week, which this year took as its theme ‘Eat Share Love’. This included presentations about the Week, about other initiatives such as the Big Lunch, as well as musical performances, a poetry recital and the sharing of food – including the two-time winner of ‘best dark chocolate truffle in the world’ mentioned above!

Scottish Interfaith Week began 5 years before the Week in the rest of the UK, and was the inspiration for it. One of those involved in pioneering the Scottish Week, Ravinder Kaur Nijjar, suggested it when she was a Trustee of IFN. It was wonderful to see her on BBC’s the One Show later in the week, as part of a special Inter Faith Week segment.

In Bradford, I attended ‘Women of Faith’ with IFN’s intern, Madiha. The event was organised jointly by Believing in Bradford – a partnership between the Bishop and Mayor of Bradford – and Bradford Council. This event featured women of different faiths in the city both sharing their own experiences, and sharing stories of women of faith who have inspired them. 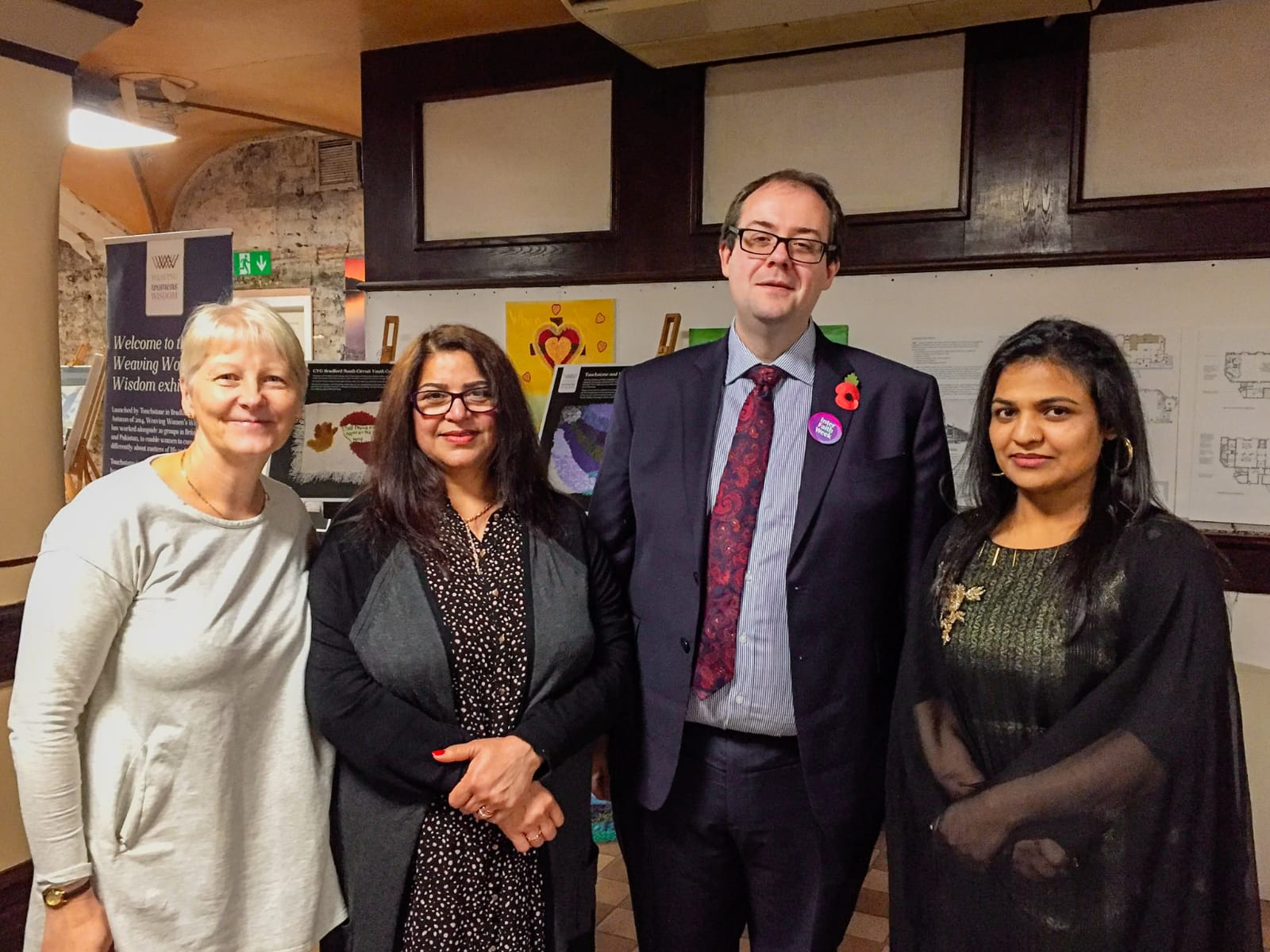 On Tuesday, I was in Blackburn at an Inter Faith Week celebration organised by Near Neighbours East Lancashire and the Lancashire Forum of Faiths. The day included musical and dance performances from a wide range of cultures – from traditional Indian folk dancing to Lancashire clog dancing – as well as hands-on activities, including the opportunity to design and make a bead for a giant string of prayer beads. The event also included an exhibition of the ‘Weaving Women’s Wisdom’ rugs, part of a nation-wide collaborative arts project led by Touchstone in Bradford. Blackburn with Darwen is a local authority that is taking part in the Government’s new work on integrated communities and much was going on there during the Week.

On Wednesday, I joined the Sisters of Sion at their Centre in Notting Hill in London for a day of scriptural study looking at women prophets in the bible. We were expertly led by Rabbi Rachel Montagu, exploring well known, lesser-known (and in my case one unknown) female prophets, and the different aspects of prophetism in the Hebrew Bible.

Participants at the planting of the Ahimsa Peace Forest in Kenton

On Saturday, I took part in the planting of an ‘Ahimsa’ Peace Forest in Harrow, organised by Shrimad Rajchandra Mission Dharampur, OneJain,  Harrow Interfaith, Harrow Council and Trees for Cities. This saw the planting of 1,000 trees, as well as spring bulbs, in a park in Kenton, to mark Inter Faith Week and to commemorate the 150th birth anniversary of Mahatma Gandhi.

On Sunday, I took part in the Watford Interfaith Association’s annual Inter Faith Week Pilgrimage, visiting an Orthodox Synagogue, Sunni and Shi’a mosques, Anglican and Roman Catholic churches and a gurdwara. The Synagogue’s Mitzvah Day volunteers also laid on delicious refreshments for us before the walk began. There were plenty of opportunities to talk to other ‘pilgrims’, and it was clear that while some were new to the pilgrimage and others had taken part in past years, all had learnt something new about other faiths during the day.” 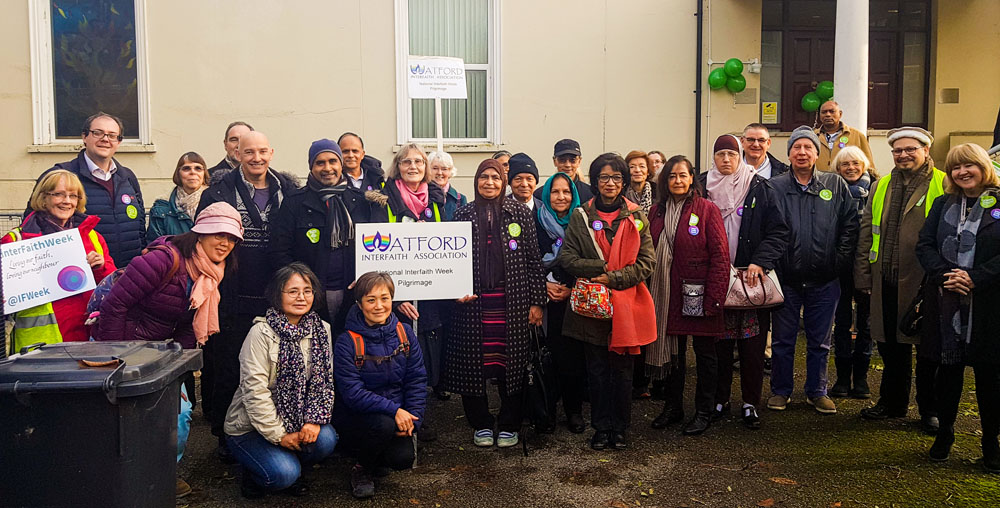