The Inter Faith Network for the UK leads on the Week, and its Co-Chairs, Bishop Richard Atkinson and Jatinder Singh Birdi have said:

“The 500+ events that have taken part around the UK have sent a powerful signal about people of different faiths and beliefs working together for the good of our shared society and about the importance of positive inter faith relations. The Week has also highlighted the enormous contribution that those of all faith and belief communities make – in most cases through volunteering – to their local communities.”

Faith communities have taken part across the UK.  They have hosted those of other faiths, journeyed with each other to visit each other’s places of worship; discussed responses to the challenging issues of the moment; contributed to social action projects to help their local communities; and taken active roles in civic and other markings of the Week.  Locally, an increasing number of churches, gurdwaras, mandirs, mosques, synagogues, temples and viharas have thrown open their doors. People of non-religious beliefs have also been actively involved in many events.

Inter faith organisations have also played a significant role in the Week, from the UK’s 250+ local inter faith groups, through to national inter faith bodies. A special event held at the Houses of Parliament by the All Party Parliamentary Interfaith Group with the Inter Faith Network for the UK  on Tuesday 15 November explored local inter faith work and the importance of local inter faith bodies with inputs from Interfaith Glasgow, Faith Network for Manchester and the Redbridge Faith Forum. There was cross-party participation in the Week at both national and local levels.  Both Communities Secretary Sajid Javid and Communities Minister Lord Bourne of Aberystwyth attended events.

This year has seen many public agencies getting involved in the Week: from local authorities, to emergency services.  It has also had energetic involvement from a range of organisations from other sectors such as Sporting Equals and participation from many youth bodies such as Girlguiding and the Scouting Association. It has seen wide-scale involvement from schools, colleges and universities, museums and libraries, youth organisations, other voluntary and community bodies, and many more.

At the outset of the Week, £250,000 of ‘small grants funding’ was announced by Communities Minister Lord Bourne. The ‘Common Good’ programme will give pots of funding to projects that bring together diverse communities and different faiths through a range of activities from cookery classes to teaching computer coding.

Many event organisers and participants tweeted about the Inter Faith Week activities they took part in, and tweets about the Week have had a potential reach of over 5.5million Twitter users with over 18.5million impressions. Many tweets linked to the Week can be seen on the @IFWeek twitter feed. 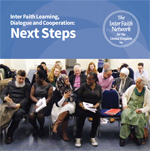 A booklet containing information and pointers about different ways to get further involved with inter faith activity.

A downloadable/ printable version of this press release.