David Hampshire is Assistant Director at the Inter Faith Network for the UK. Here, he reflects on events he attended during the Week in London, Edinburgh, Derby and Devon, as well as on a new resource for primary schools launched during the Week.

David Hampshire is Assistant Director at IFN. He visited activities in different parts of London, Edinburgh, Derby and Devon during Inter Faith Week. He writes:

"This is my fourth Inter Faith Week as a member of the team at IFN. What has struck me over these four years is the tremendous energy of those holding events and the wide variety of ways of marking the Week. This year has been no exception. 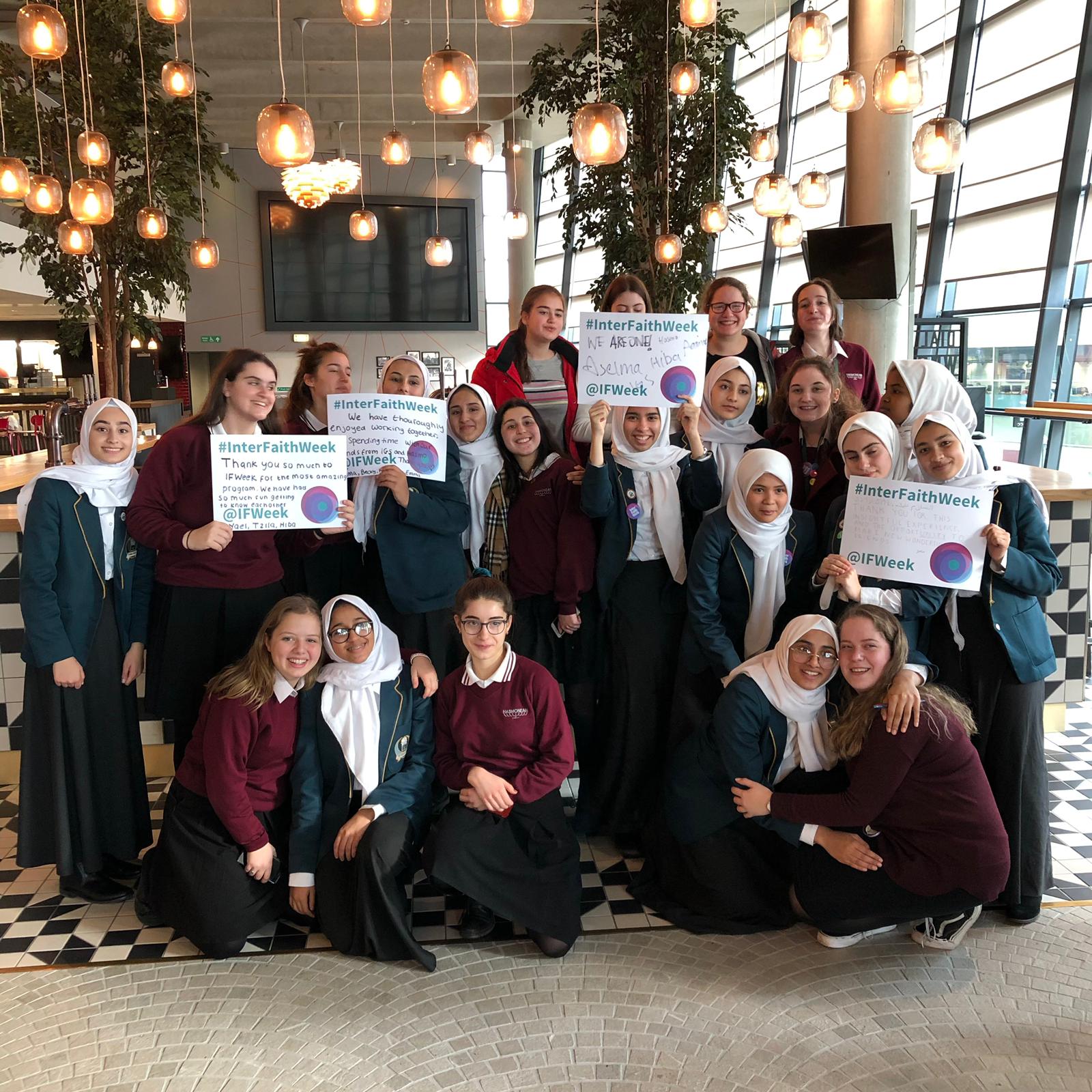 Pupils at the Arsenal in the Community event

I started Inter Faith Week with my colleague Ruth Foster when we visited The Emirates Stadium, the home of Arsenal FC. Arsenal in the Community have been working with girls from Hasmonean and Islamia schools to produce workshops for primary pupils about religious festivals held by people of many faiths in the UK. What struck me was the obvious friendship that had developed between the girls as they had worked together on their presentations. Normally these pupils, Year 11 to 6th Form, would simply never come together and this event provided that opportunity. 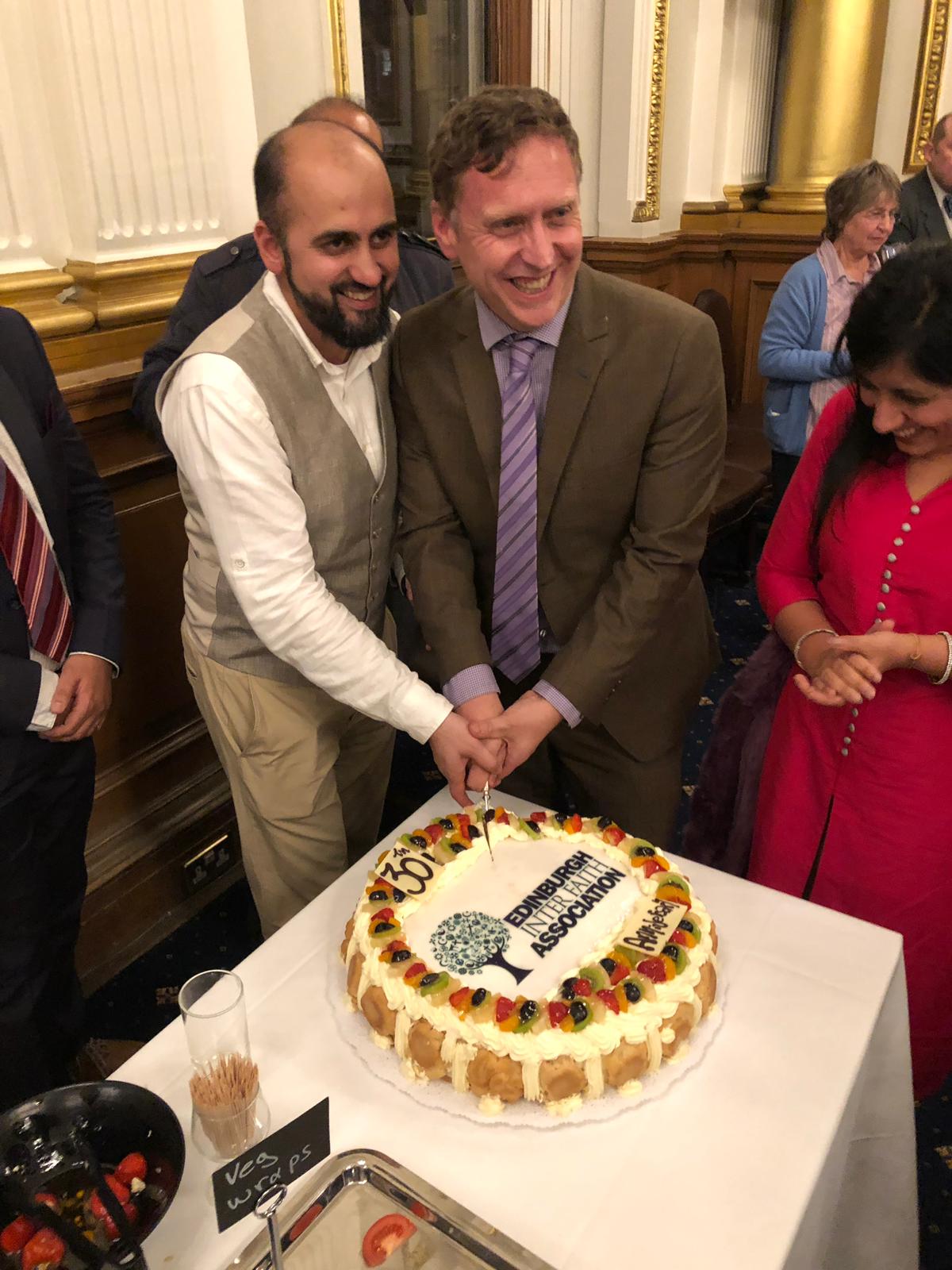 On Tuesday I set off to Edinburgh and was a guest of the Edinburgh Inter Faith Association (EIFA) to celebrate its 30th anniversary. I had the opportunity to meet many of those who were there from the early days up to the present. The focus of the meeting was, in part, on the changing nature of the religious landscape in the city and the importance of EIFA, led by Professor Hugh Goddard, and wider trends in Scottish religious practice. The key note speaker was Professor Ian Bradley who explored the growth of pilgrimage in Scotland in light of its Reformed Christian history and the developing pilgrim trails across the country. This was followed by Imam Shakyh Hassan Rabbani on ‘pilgrimage in Islam from a Scottish Muslim perspective.’ At the end there was the cutting of the 30th anniversary cake by Iain Stewart, EIFA’s Executive Director, and Imam Rabbani. I was honoured to be present at this key milestone in EIFA’s history. 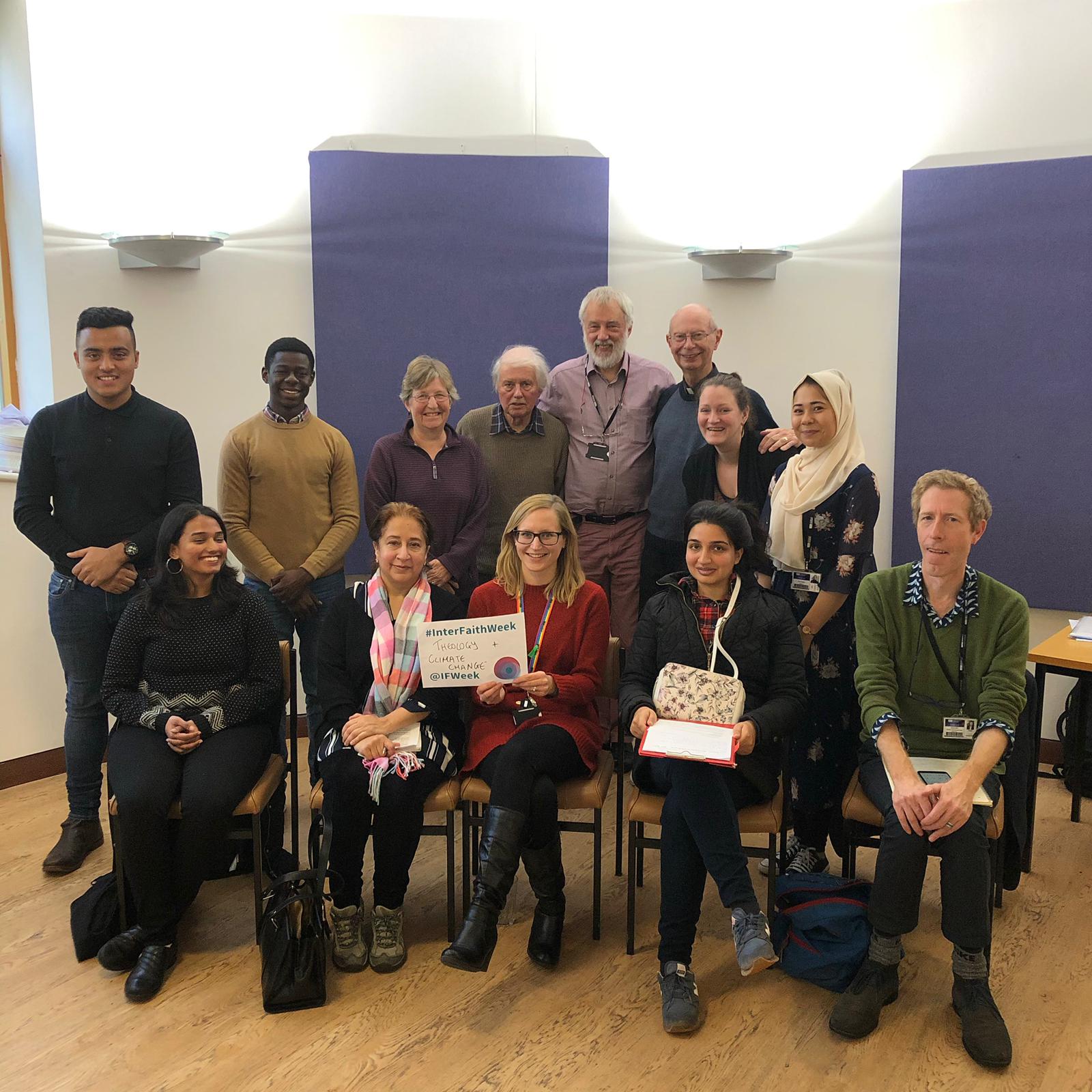 Participants at the Multi Faith Centre at the University of Derby

From Edinburgh I headed to Derby, where I joined the Inter Faith Week event Towards a Theology of Climate Change led by Keith Munnings, the University’s Buddhist chaplain. The event was attended by staff, students and members of the wider community and explored different faith responses to climate change. This was part of a wider project where students have been asked to write a resource on this important topic. What I was also really interested to hear about was the University of Derby’s ‘Inter Faith Buddies’ scheme. A collaboration between the University’s chaplaincy team and the Multi Faith Centre the Buddies scheme enables students from different religious backgrounds to come together to explore their own faith traditions, learn about others’, explore topics and develop projects together. It started at the beginning of this academic year and has seen real growth since it began. I left feeling really excited about the work that is being developed in Derby and how Inter Faith Week is contributing to that work. 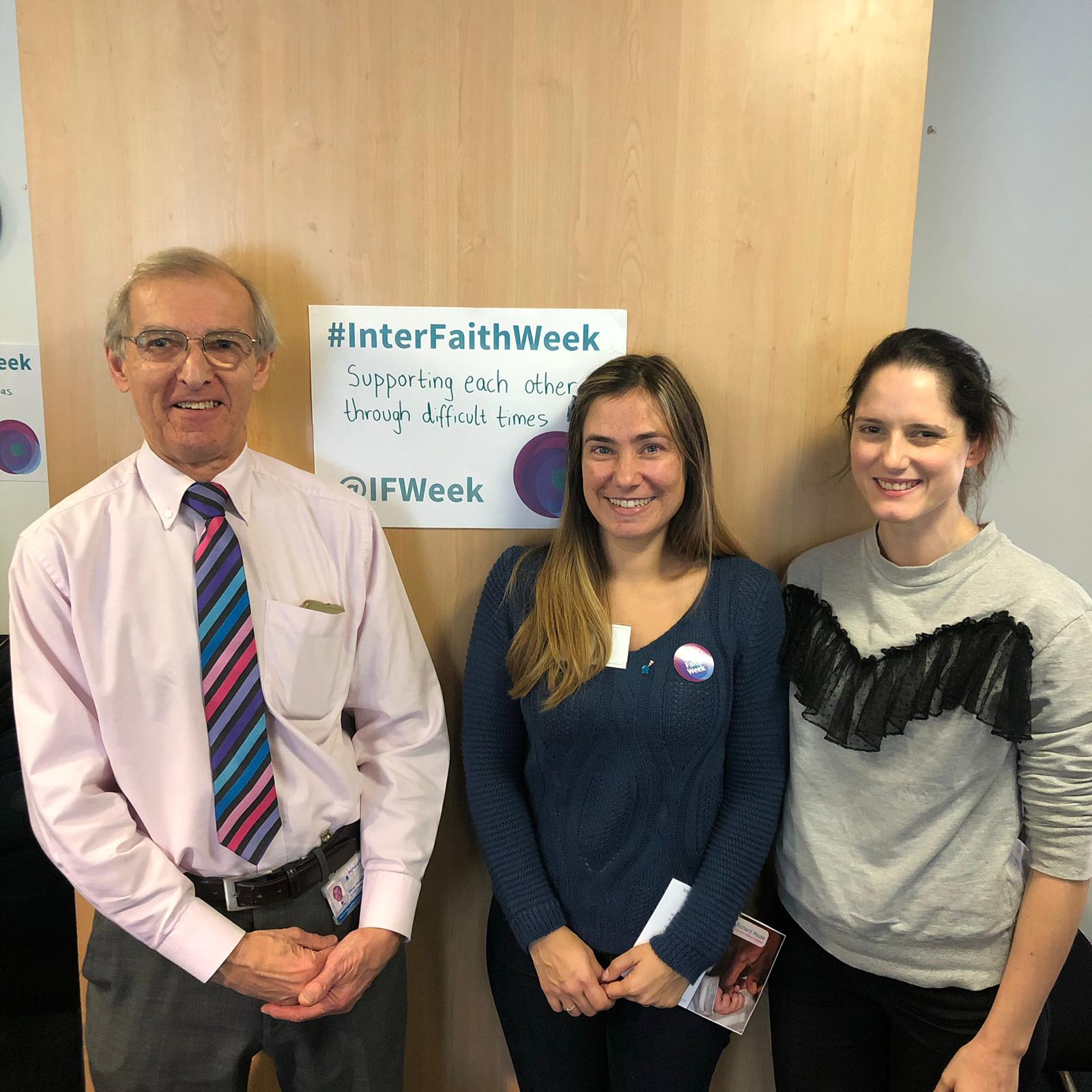 On Thursday I headed out to the Docklands area of London and went to a breakfast event at Richard House Children’s Hospice, the first hospice specifically for children in London. At the event I met the founder Anthea Hare, trustees, staff, family members and supporters of the hospice from across the community. After breakfast those participating in the event learned about the importance of meeting the religious and cultural needs of children and their families, the role of faith communities in supporting the charitable work of Richard House and what it was like to be the parent of a child at the hospice. East London is one of the most diverse areas in the world and those using the services of the hospice reflect that diversity. For me it was a really humbling experience. 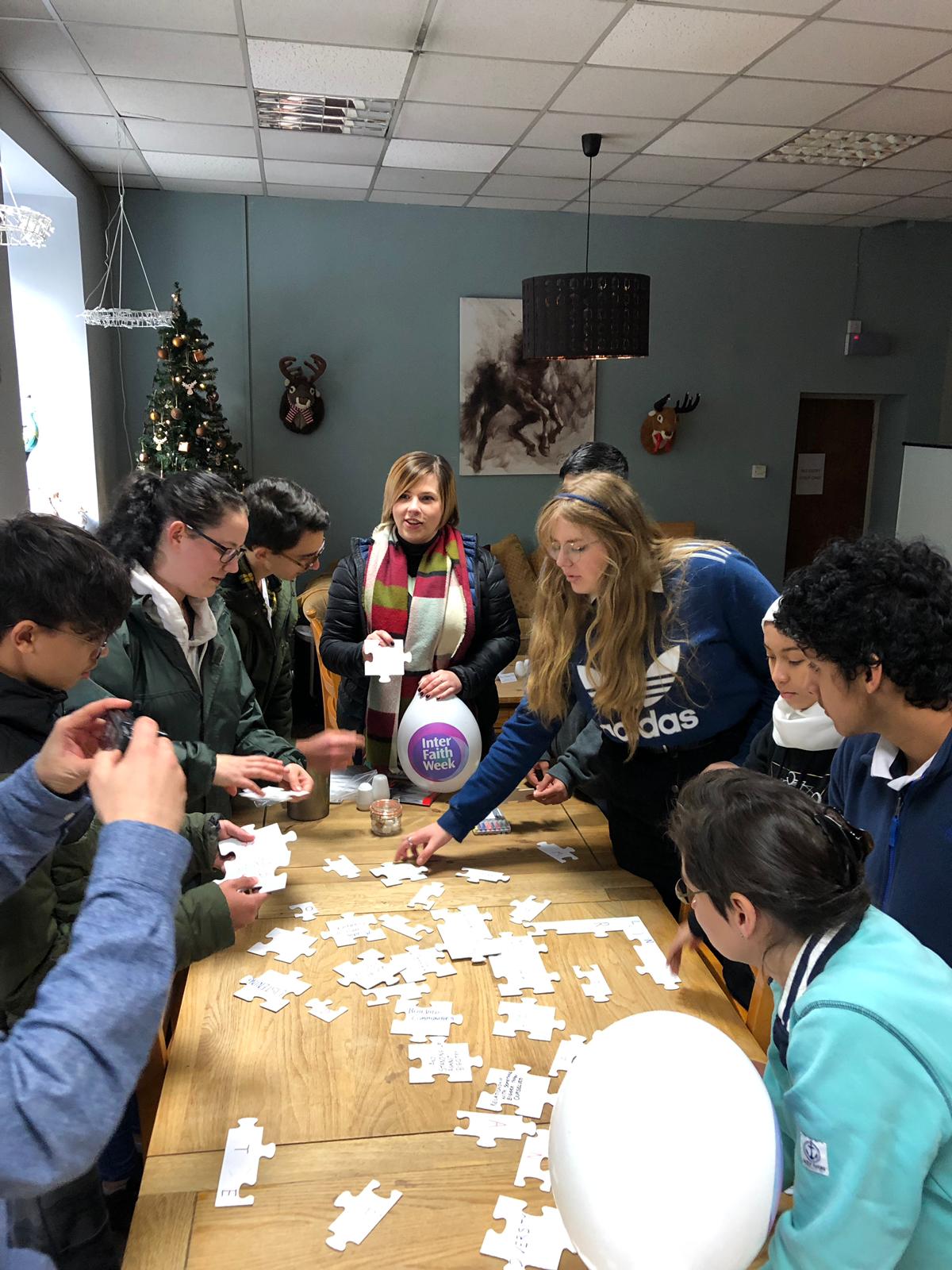 Sunday saw me in Devon at the re-launch of DIFFY, Devon Inter Faith Forum 4 Youth, at Lupton House where the topic of ‘Building Bridges and Valuing Visions’ was explored. Young people from across Devon and Torbay came together to look at ways that DIFFY could meet their aspirations and grow in the coming years. Participants took part in a number of activities to help them develop ideas that could be taken forward in the future, and ate a hearty and inclusive lunch. Lupton House is set in beautiful grounds and it was wonderful to be there on a cold autumn day with the leaves turning from various shades of green to red to brown. I am sure that the newly formed DIFFY will grow from the acorn of IFW 2019 to a great oak in the future.

The other exciting part of my week was working on IFN’s resource for primary schools to promote learning about inter faith activity, with a focus on England. Of course IFW is a catalyst for much of that activity and a showcase for so much more. I ended IFW with a real buzz and the hope that the events I was privileged to attend will continue to bear fruit into the future."